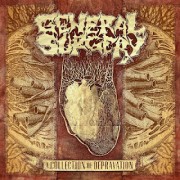 A Collection of Depravity may not reinvent the goregrind wheel but they may have added a spoke or two at its inception. A one time Carcass clone, General Surgery recently resigned to Relapse Records who released a 30 song compilation of the band’s 20 plus years of history, though admittedly some of their earlier work is missing. The album consists of classics, rare demos, unreleased tracks and a handful of covers and for a band who’s primary releases have been obscure splits its a gem.

The album contains work from pretty much every incarnation of General Surgery’s ever changing line up which was consistently anchored by guitarist Joacim Carlsson. Being that the album is pretty much a retrospective of the bands work, A Collection of Depravity allows you to follow the band’s progression beginning with older songs like “Pre-Bisectal Corrosive Immersion” and “Lab Rat” which are straight up short, dirty goregrind to newer and “cleaner” sounding songs like “Deadhaus” which has the same brutal sound but seems to contain more “melodic” aspects.

There are also a covers of the bands contemporary legends; Carcass, Repulsion, Carnage and Xysma. The most notable is Carcass’s “Empathical Nectotism” which while heavier than the original it’s impossible to out Carcass from Carcass. The Repulsion cover, “Maggots in Your Coffin,” is pretty amazing as well.

From front to back the album has all the trappings of an amazing Swedish goregrind album. The vocals, regardless of who had the helm, are as heavy and as distorted as can be and at times the lyrics could make Corpsegrinder blush. Top all of that up with the fact that the incredible Scott Hull took on the labor of producing the album and you have a straight forward grind album that I would recommend for anyone. If you’re new to grindcore or not really into it, probably not a place where you want to start but it does give you an interesting perspective into not only the band’s progression over 20 years, but the grindcore scene as well.