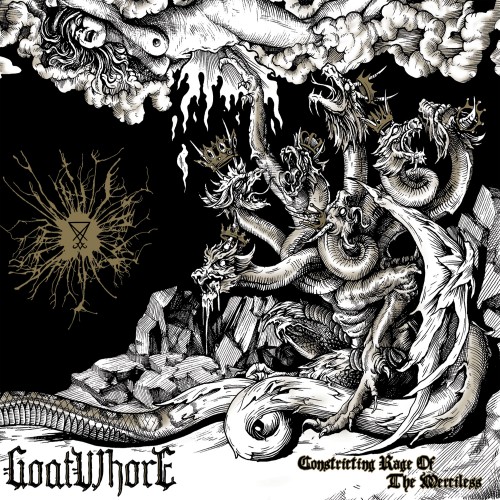 I tend to write record reviews with pretty high ratings. This is because I try and go after albums to review that are quality, rather than giving yet more press to unwarranted, second rate bullshit. But trust me, Goatwhore deserve this high rating for Constricting Rage of the Merciless. I challenge anyone to fault my attention to detail on this. I will fight you. That said, I did also give 5 stars to Glorior Belli’s also deserving Gators Rumble, Chaos Unfurls, so maybe I also have a soft spot for gator humping blackened swamp death. The devil is in the details.

Hard to believe Goatwhore are creeping up on twenty years as a band. I remember well when they first surged onto the scene, like Falgoust’s other outfit Soilent Green, completely rebelling against what you were supposed to be allowed to do in extreme metal. Guitarist Sammy Duet’s post Acid Bath band was a much gruffer and blackened affair, a churning unstoppable beast of spiked bracelets and boiling swamp reeking hellfire smoke whose first two albums are stone cold fucking classics to me.Funeral Dirge For The Rotting Sun in particular really opened my eyes to more blackened shores of musical thought and philosophy which in turn led me to finally dig backward into Celtic Frost and the storied history of black metal I had always avoided in favor of thrash or industrial music. Ever since I interviewed them years ago in Woodstock, NY (of all places), they sunk their hooks in me deep.

As on recent efforts like the newest release is produced by Hate Eternal’s Erik Rutan who has the likes of Ephel Duath, Cannibal Corpse,Agnostic Front and countless more on his resume. His partnership with Goatwhore has yielded them their biggest gains, starting with A Haunting Curse in 2006. This sixth release has a little of everything for the discerning fan, but focuses mainly on the blistering speed of the band. “Externalize This Hidden Savagery” is one of the fastest, pit friendly songs the band have ever written, and continues Falgoust’s tradition of being able to somehow come up with the most metal fucking song names you have ever heard with a straight face. “Reanimated Sacrifice”? Check mate. Seriously, it doesn’t get much more metal than “Nocturnal Conjuration of the Accursed”, a thrashing number with almost bayou seasoned Feel The Fire type Overkill riffs mixed with Duet’s unmatched control of dark dissonance and a face fucking red hot guitar solo. Goatwhore know exactly what they want to do and always have. Recorded on two-inch analog tape, this record is full of organic power and punch.

Since the early days, partly due to the infamy of their name and partly due to a tireless work ethic and veins full of molten metal, Goatwhore have against all odds become very well established. It is a perfect example of will to power actually working. I mean, it helps when you write some of the grimmest fucking riffs in metal and have an insane drummer like Zack Simmons or an absolute chaos prophet frontman in the first degree like the once in a generation metal talent Mr. Ben Falgoust. Cheers to the brothers ‘whore for all their dedication.

“Unraveling Paradise” is blast beat fury and guitar picking on a crazy scale that feels like being in a storm while Falgoust’s screams bite and snarl at you out of the obscured vison of flying debris. It is dark, whiplash inducing and almost sexy, just so brutally perfect. Blood For The Master still has the all time best Goatwhore cover art, but this just may be their most concisely direct release. It is just true heavy metal through and through to the first degree. This is the stuff that will still terrify parents, not garbage mall-core with neon fucking colors. “Baring Teeth For Revolt” has a serious 80’s thrash circle pit feel, almost sounding like fire barf blackened Suicidal Tendencies (??!!) for a minute in the verses. “FBS” has the best opening scream since “Angel Of Death”, and yes, I know that is a bold claim. The standout track for me, however, is the ominous “Cold Earth Consumed in Dying Flesh”. The one thing about the much faster Goatwhore is I really miss those gorgeous, dark cemetary sex riffs Duet used to sling in Acid Bath tunes like “Bleed Me An Ocean” or “Graveflower”, so whenever Goatwhore slow it down (part of the reason Funeral Dirge is my favorite LP of theirs), I get a robot chubby. This particular number, “Cold Earth…” is a doom metal-level mudsliding avalanche that pours and oozes down the slopes of Hell to coat the City of Dis in ashened hate before erupting into molten speed fury by the end in soul eating Goatwhore style.

You have been told. 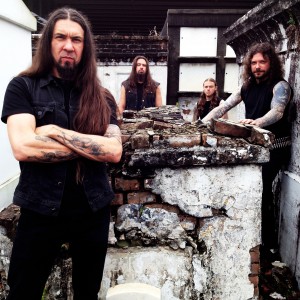