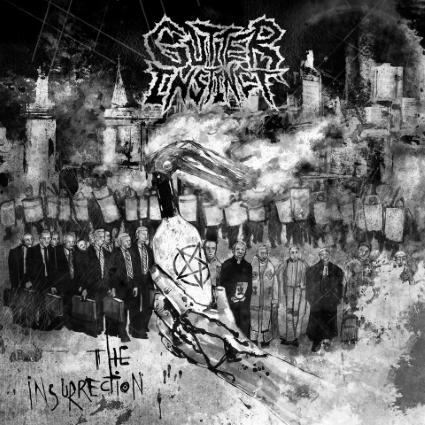 If you like Swedish metal fast, roaring and unafraid to get dirty hands death grinding, Gutter Instinct are for you. The Insurrection EP is a 4 song tease of a brain smasher that heralds the start of a big push for this awesome band via Prosthetic Records. Things kick off with a sweep and air raid sounding hellish atmosphere before the full on attack begins.

Gutter Instinct have only been a band a few years but you’d never tell it from the concise little life burner of an EP here. You can imagine live decimation even if the band just got up and played these 4 songs. I honestly can’t even imagine a room withstanding many more than that in a Gutter Instinct live set.

This band does not mess around. They get down to unrelenting death metal but with a decent enough production that still leaves room for rawer sounds. It sounds just good enough to not have the recording quality distract from the evil.

Taking some of their earlier Cannibal influence and adding in some more grind and blackened moments pays off well. One such win is the apeshit soloing over a super fast drum blast that batters into a razor’s edge hard charging Napalm unison riff attack on “The Invisible Hand”, Gutter Instinct nearly derailing but they never do. In fact they make it seem easy, but still have feeling in the playing.

“We Hate You” is one of the more interesting arrangements in recent death metal, respectfully dissonant weirdness birthing buzzsaw snarl straight from tremelo hell into a fucking stomp a mudhole bridge that takes no prisoners. They never get as black or crusty as Mutilation Rites but rather lean more on the Portal or classic death metal influences more.

Any true death metal fan worth their salt who doesn’t mind some more blackened textures but with the emphasis still mainly on DEATH will love the heck out of this band.