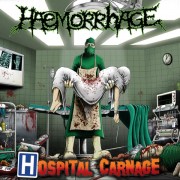 Attention: If you do not like Carcass then you might as well stop reading this right now…

Those of you that have continued on will be glad to know that Madrid’s favorite musical pathologists have returned with a brand new album, “Hospital Carnage”, their first with Relapse records. If you have never heard Haemorrhage, the only apt and needed reference to truly be given is Carcass. To be specific, the “Symphonies of Sickness” and “Necroticism – Descanting the Insalubrious” era of Carcass. The goregrind of Haemorrhage is nothing less and unfortunately nothing really more than what could be described as a long lost Carcass album, or maybe b-sides to both the previously mentioned “Symphonies” and “Necroticism” albums.

Get the rest of the carnage breakdown here.

“Hospital Carnage” actually starts things off in proper form with “Open Heart Butchery”. The song is a catchy, mid-paced burner that truly captures the Carcass vibe and literally had me hoping for much more to follow. The problem is that there isn’t anything that really grabs me for the next ten songs. The songs are all good and they all have at least one thing that pulls you into them, if not a few, but the fact of the matter is that it’s all just a Carcass re-doing and tends to sound the same after awhile. “Hypochondriac” made me take notice with some more creative drumming than what most of the album had presented, as well as some nice but brief solo work. “Necronatology” ends up being the album’s winner and is quite a kick-ass little tune featuring some terrifically effective soloing. For some reason though, the band chose to fade the solo out early for some audio samples which ends up taking the air out of the song too prematurely. The album’s last track, “Intravenous Molestation of Obstructionist Arteries (O-Pus VI)” is a mixture of samples and blasting grind that frankly, is nothing but a 30 second waste of time.

To be honest, before “Hospital Carnage” the last and only thing I had heard from Haemorrhage was 1998’s “Anatomical Inferno”. It appears that Haemorrhage have made quite a few improvements from what I can remember from that album. The production on “Hospital Carnage” is good, the overall mix is a bit low, and I think some of the bands dynamics get a tad smoothed over, but a bad production this is not. The vocals of Lugubrious are everything they need to be for the goregrind they go for, and his hint of an accent actually gives them a nice characteristic. I would like to have heard more lead-work from guitarist Luisma, his solos are simple but tasteful, though they only crop up through “Hospital Carnage” a few times. The remaining members of bassist, Ramon, guitarist, Ana, and drummer, Rojas, all give great performances, and the band should be commended on achieving a nice Carcass inspired album. The artwork for “Hospital Carnage” should also be noted for its comic book styled gore (a Metal Riot Cover Art of the Week nominee). From what I can tell, the album is a theme-based concept and while not the most original, it ends up working very well.

In the long run, what actually hurts Haemorrhage is the fact that they are a Carcass “clone”. When there are bands like Impaled and Exhumed, who do the Carcass thing with a bit more originality and individuality, the output of these Spaniards is going to have to be a bit higher. If you eat, shit, and breath Carcass then you need this album. If not then you may want to just move along, or pick it up to tide you over until the new one from Exhumed hits the streets.