Album Review: Havok – “Time Is Up” 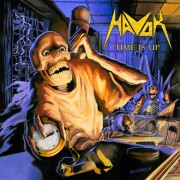 Well I’m pissed! Why didn’t someone tell me how good Havok is? I remember seeing the Denver, Colorado band’s debut album, “Burn”, on the shelves about two years ago. I deliberately passed on it for the sole reason of thinking they were just another band riding the thrash revival of the past few years. I was right, but boy, was I wrong. Sadly, my ears could have been dining on their aural delicacies far longer. Better late to the party than never, right?

Formed in 2004, Havok takes portions of Testament, Exodus, Forbidden, and the Bay Area thrash sound in general, mixing it with a dash of Megadeth and a sprinkling of Slayer for a sound that is nothing less than an old-school thrash metal masterpiece. Their sophomore album, “Time Is Up”, is out now on Candlelight Records and it is a straight-up burning, blistering, leather and bullet belt ridden cacophony of thrash excellence.

Get the full thrashing goodness here.

Thrash metal being played by guys who are younger than some of the genre defining albums is nothing new, and to be honest, Havok are not bringing anything new, original, or groundbreaking to the fold.  Though unlike a lot of their peers, Havok possesses something that puts them ahead of the pack…riffs. Sometimes referred to as mad skills, chops, or even the stuff. It is Havok’s penchant for crafting stupendously catchy riffs that do not just make you want to pull out your older thrash gems, but instead makes you yearn to revel in the youthful exuberance these guys can muster and dish out so well.

Being that the door is in the closing phase of this recent old-school thrash revival, coupled with the fact that some metal fans just will not accept something old-school like this from a young bunch of guys is something that may hurt Havok. This mentality is preposterous. What matters is the music. Does it have impact, does it stand out, does it pull emotion, does it kick ass? “Time Is Up” proudly answers a single, resounding yes, proving that doing it right has nothing to do with age, or if someone else has already done it before. Righteous metal transcends the notion of age and becomes a connection, between artist and fan, through the song. If the music slays, then most metal heads are going to be thrashing, whether it’s played by fifteen year olds or fifty-five years olds.

All of the material presented on “Time Is Up” is top-notch. The album shines with just enough technicality to stay the hand of boredom from overt simplicity and the hook/catchiness factor is simply off the charts. Whether it is the Chuck Billy meets Rob Dukes vocal delivery of David Sanchez, the excellent solos from Reece Scruggs, the punchy, ever present bass of Jesse De Los Santos,  or Pete Webber’s consistent and propeling drum work, not one member gives anything less than a stellar performance. 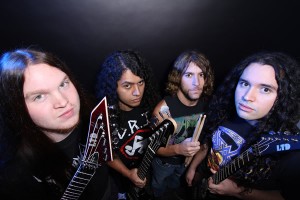 “Prepare for Attack” starts the album out in classic form with a slight build up that, when everyone kicks in, lets you know that these guys mean business with there Megadeth influenced noodling. “D.O.A.” is another highlight that somehow mixes Testament, Exodus, and Slayer, right down to the classic Tom Araya scream, but does so in a way that comes off as fresh and exciting, not unoriginal or re-hashed. The thrash gems continue with “Killing Tendencies” delivering not only some fantastic riffing, but having every instrument really shining. The lead work is terrific, conveying some nice emotion, not just fretboard wankery, between 3:07 – 3:32. “Scumbags in Disguise” is another awesome track that heavily recalls early Testament, but again, the band manages to make it their own and by doing so, come off with a confidence that just solidifies the material even further. Havok seem to understand the scope of dynamics, and know how and when to slow or speed things up to benefit the impact on the listener, i.e. “The Cleric”, with its simple yet effective double time jump at 3:23. To be honest every track on “Time Is Up” is a raging, barn burning, winner that had me anticipating the next.

Additional accolades are deserved for Havok, as it was the band themselves that actually recorded “Time Is Up” in their own home in Denver. The band even used their own washer and dryer to help provide additional percussion to the song “The Cleric”. Mixing was handled by Pete Rutcho, while the legendary James Murphy manned the mastering job laid to the album. Even the cover artwork has the ability to pull from the influence of thrash metal’s originators and still come off with a fresh, independent vibe.

I thought that maybe it was just me. I thought that maybe Havok just happened to catch me on the right day, and that any other time I would dismiss their thrash metal as played out, re-hashed drivel. That isn’t the case my friends. “Time Is Up” is a new, old-school thrash metal monster that proved itself to me time and time again over the two week listening period I gave myself with this album. Is it something you have never heard, and or experienced before? Hell no. Is it something that every real fan of pure, unadulterated thrash metal can raise their fists high and bang their head hard to? Hell yes! 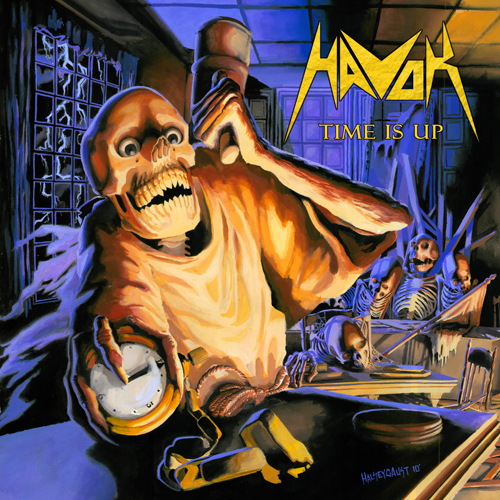