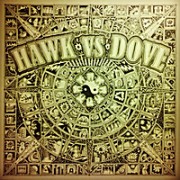 Hawk Vs. Dove (from Dallas, TX) prove that good talent can still rise up in the underground seemingly out of the blue. In truth, the members of this band have been playing in the scene for years in various underground bands like Stew! and Hello, Lover. Still, the fresh energy and power of Hawk Vs. Dove is sure to make new fans of open minded, hard working hard rock.These guys are fans of everything from Lightning Bolt to ZZ Top.

In the Grunge days it wasn’t unheard of for straight-forward rock songs to also show innovation, and that is the case with this debut. It’s a great balance of familiar and edgy. “The Sabbath” is Alice In Chains meets Harvey Milk in all the right ways. They would fit so well on Small Stone Records it makes me smile, and I hope someone at that label reads this!

HvD have all kinds of warm harmonies and great guitar tones, very attentive to detail.  The band are adept at mining the power of every note and arrangement.

“Between the Headlines” has a Karma To Burn feel but with hoarse vocals and rip roaring squawky, garage-punk guitar soloing. It would set a pub on fire. “Only Words” is pushy sludge with an almost Tool feel but far more primitive and atonal.

Another highlight is “Rockwaltz”, which is shifty and jerks around like some weird Jesus Lizard riff talking to Fu Manchu and then married by some falsetto vocals. Pure, shambling hypnosis. “Wild Life” is slow and dirty, almost like a Radiohead elegy. Kind of Dreamy, if a hard rock band dabbled into the darker territory on Radiohead’s ‘Hail To The Thief’ album.

While not the heaviest band in the world, these guys are great hard rock, grunge-metal that matters and deserve a lot of attention. Order the record HERE.