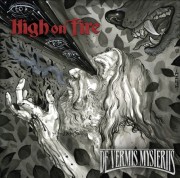 Doom metal. Stoner metal. Sludge metal. Define it with a label if you must  but in the end there are only a handful of bands do what High on Fire does, much less on a scale and level in which they do it. In 2003 I was introduced to a little album called Dopesmoker by a band known only as Sleep. Dopesmoker consists of a single track that clocks in at 63:31 and it completely blew my mind. Thus, was I introduced to High on Fire and my obsession with this crushing band began.

De Vermis Mysteriis is HoF’s sixth studio album and with its increased production reminds everyone how truly brutal and heavy HoF is and doom metal can be. Translated as “The Mysteries of the Worm”, De Vermis Mysteriis is a concept album that centers on H.P. Lovecraft’s Cthulu mythos and follows the life and times of the brother of Jesus as he travels forward and then backwards through time.

Concept albums can be a tricky thing. To find out how well HoF executes this latest addition to the world of concept albums, head on over here.

Rather than ease into it as many concept albums do, De Vermis Mysteriis starts out in fifth gear with a pummeling guitar cadence, quickly followed by a crunching guitar riff and bass line, and within seconds you are blessed with the gravely vocals of one Matt Pike. If the opening track “Serums of Liao” is any indication of what’s in store, it’s gonna be one helluva trip.

The heavy distortion of time traveling continues with “Bloody Knuckles” with sheer its sludgy goodness and is followed by “Fertile Green”, one of the album’s stand out tracks. “Fertile Green” opens with a great Des Kensel drum intro to be only abruptly interrupted by the sledgehammer of a riff and biting vocals. The opening tracks are some of the most vicious tracks that I’ve heard from this band, which for anyone who is familiar with HoF is quite the accomplishment. While De Vermis Mysteriis is easily identifiable as being HoF, it’s not until  “Madness of an Architect” that we encounter their more traditional doom/stoner/sludge sound. It’s slow (relatively) and menacing, whose last few minutes are spent in a gloriously screaming guitar solo that ends in feedback, leading perfectly into “Samsara”, an incredible instrumental track.

“Samsara” shows off what High on Fire does best, create a sound that listeners can physically feel and put them into a transcendental state of awe and wonder. Transitioning from “Spiritual Rights” to “King of Days” to the title track to “Romolus and Remus” to masterful closer, “Warhorn”, sets the listener on a sea of sound, sailing the sonic waves as they ebb and flow and the conquering tide takes the listener away from shore and into the high seas of wonderous fire.

Upon the first listen, I thought that the band had progressed into an extremely heavy direction, but upon reviewing their previous works and paying closer attention to this latest of releases, I realized that the production of De Vermis Mysteriis is such that the talents of High on Fire are only more pronounced and done without losing the heart and soul of their sound. Many bands fall prey to poor production and mastering, but in the masterful hands of Kurt Ballou (Converge guitarist) High on Fire have perfected their recorded sound.

De Vermis Mysteriis is an unbelievable album by an unbelievable band and not an album or a band that some veteran and many novice metal fans will like or identify with, as it is a sound and style that often only an open mind and open heart can come to appreciate. For some, either they get it or they don’t. It’s a lot like drinking beer – domestic beer is good and all but when you start branching out and discover the art of craft brews, it’s near impossible to go back to the domestic unless you’re just trying to party and get drunk. Then there are those that are completely content in their oblivious naivete to the many glories that await them.