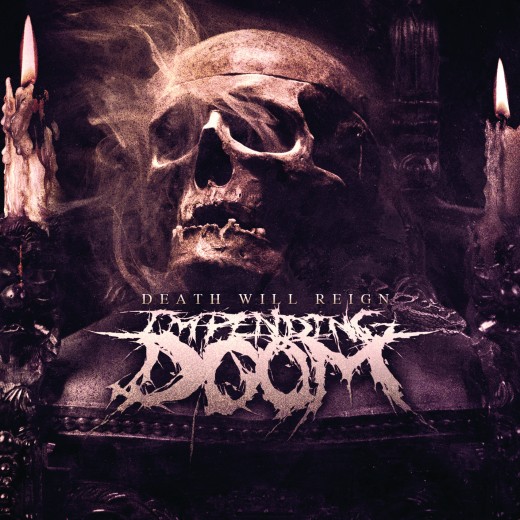 Check out the Metal Riot review of Death Will Reign here.

If it ain’t broke don’t fix it! And that’s how Impending Doom does it with the opener (“Ravenous Disease”) to their newest, latest, greatest and soon to be released fifth studio album Death Will Reign. That quiet, growing, mechanical sound erupts into blasting guitar and drums as Brook Reeves roars, “Sell your soul! Sell your soul we will swallow it whole!”

This record isn’t Nailed. Dead. Risen. heavy in the presentation, but there is no mistake that this album packs a punch. Gore, gorship, goregrind, death metal, deathcore – whatever you want to call it – it’s definitely heavy, it’s definitely brutal and it is definitely METAL! The sound is giant, particularly on the title track as Brook growls, “DEATH WILL REIGN!” and the instrumentation falls out from under you, plunging you into the heaviness of this album.

The greatest things about this album are the awesome lyrics. Very claustrophobically apocalyptic. They fit very well with the modern day obsession that the end is nigh and that all is crumbling to ruins. On the title track Reeves paints dark imagery, “Drawn from the shadows // Demons dance in the black // Clawing at the cross // Carried on my back.”

In a world separated by endless polarities, the lyrics of Death Will Reign fly a different flag. In the song “Beyond The Grave” Reeves growls, “Walking roads that seem to never end // becoming the dead bones that we thought were hidden // I’ll show respect no matter what you believe in // Never again will I judge the life I’ve not been given.”

The second greatest thing about this album is that it never tries to be the heaviest, most brutal album instrumentally. Impending Doom have been there and they did it fairly well. This album is a very personal album, including “My Blood” which Brook wrote to and for his son and his wife, “I would sacrifice my life for my son and my wife // You can break my heart and my bones but you’ll never take my home.”

While the album certainly has its stand out tracks (“Death Will Reign”, “Ravenous Disease”, “My Blood”) nothing within the walls of Death Will Reign are filler.

From “Ravenous Disease” to the eerie piano on “The Great Divine” that plays the listener out of Death Will Reign this album is a journey and it has something that will resonate with anyone and everyone.

For more on Impending Doom, check out the Metal Riot interview with Brook Reeves here.