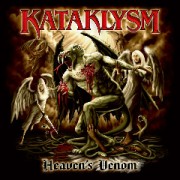 “…..you ain’t ever gonna be able to hit harder than life…” These are some of the words spoken form the opening track of Kataklysm‘s latest album, “Heaven’s Venom.” While life might be the hard hitting champ, these French-Canadian hyperblasters can surely run a close second. In fact hard hitting could very accurately describe Kataklysm’s entire discography.

After the intro from the Rocky Balboa movie the band rips right into “A Soulless God.” A great track that really captures Kataklysm doing what they do best, mixing catchy grooves and tempos with a dash of melody and enough dynamic variety to fend off any boredom, and doing it all with an instantly recognizable sound. Even though the band are not quite the hyperblasters that they used to be, there are still plenty of rolling blasts thrown into this song as well as all the others to satisfy lovers of the blast-beat. In fact this is arguably the best album since 2001’s “Shadows & Dust.”

The problem is that the band has pretty much been side stepping in their progression since “Shadow’s & Dust.” While you could very easily apply the old “if it ain’t broke, don’t fix it” mentality to this, it really starts to put the band in a formulaic state. If you are a Katakylsm die hard then this obviously will not matter to you, but if you are one of the fence sitters when it comes to Kataklysm, this record will do nothing to win you over.

The production is top notch once again, showing that guitarist J. F. Dagenais knows what he is doing behind the mixing board. The musicianship is excellent as always and Maurizio Iacono’s vocals are as seething as ever, even though it seems that his high ends do not pack the punch that they once did on past albums. The songs are all better than average quality with the standouts being the aforementioned “A Soulless God,” which actually reminds me alot of “Hypocrisy” with it’s balance of brutality and melody; “Hail the Renegade,” with it’s dynamics and variety and a nice JFK quote thrown in for good measure, and the album’s last three tracks. In fact the last three are my personal favorites from “Heaven’s Venom.” “At the Edge of the World” packs in some terrific melodies, “Suicidal River” straight up brings to mind Amon Amarth, which is never a bad thing, and “Blind Saviour” comes in as the album’s slowest track but is extremely appealing in it’s nature.

Wrap all of this up in a nice digipack release from Nuclear Blast, complete with high end glossy packaging (even though the cover art/band’s mascot is played out) and what you have is a really good, satisfying, safe album. Recommended for Kataklysm die hards and any other metalheads that do not own the band’s last three albums.