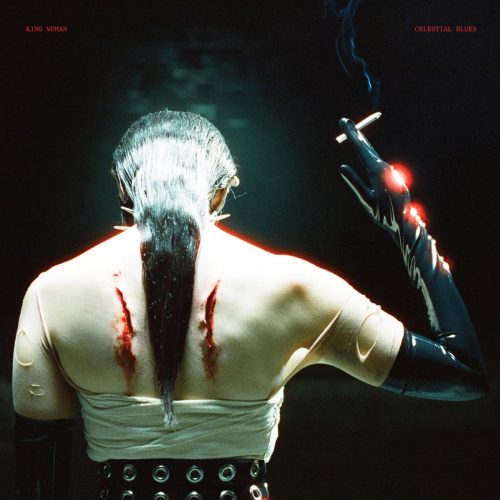 Some of the best art comes from outgrowing that which does not serve us, self-empowerment through (not strictly Biblical) transfiguration. Doing the hard work of allowing change. Everyone has light and dark sides and, not always, but in many cases that depends on your vantage point. But sometimes we have to risk it all to grow and thrive.

As far as an example that relates to the new King Woman album, what came to mind first was Margarita (influenced by Faust’s Gretchen) from one of my favorite books. Yes, I mean Bulgakov’s The Master and Margarita (I have a large rib tat of the evil sarcastic drunken Satanic black cat Behemoth pointing his pistol towards my crotch, hahaha). Anyway, not only did this classic book serve as the impetus for “Sympathy For The Devil” but it featured a skewering of false and vain people, an examination of Christ and Judas as almost co-dependant in how they expose one another’s weak spots, a woman escaping an unhealthy situation and demanding art be deified and a sort of culmination of apotheosis via a Walpurgis Night wild ceremony. While King Woman’s new completely cathartic doom and bloom (over strictly gloom) sophomore album draws more from Paradise Lost influences- the classic of literature, not the metal band- there are some similar touchstones here. Albeit with smoky, jazz alluding shadowy atmosphere paired with heavy metal and brilliant vocal layering.

Created in the Image of Suffering was our album of the year when it came out and I kind of think this one is even better already. Damn, yo.

The title track captivates from the start with a plaintively almost hesitant Kristina Esfandiari speaking the album name over sparse and atmospheric, frail notes. It almost sounds like a statement of intent…celestial blues. To feel the vast cosmos in all sadness and beauty, contradiction and pain. All of the band’s music has felt like both a refuge and semi-addictive but also totally overwhelming at times, and things start right off that way this time as well. Something about the initial energy reminded me fleetingly of PJ Harvey’s “Catherine”, maybe the saddest song and my favorite from the Is This Desire? era and the “I damn to Hell every second you breathe” sparse bluesy vibe.

King Woman (and Jack Shirley) have created a masterful event here. Esfandiari channels characters and bares bones over intense and well composed doomgaze. I have been thinking how it feels more streamlined, but not in a watered down sense. It is like the band have managed to not lose their avant-garde edge while really refining and focusing the material more than ever. There is a hypnotic pull and spellbinding tension to doom songs that other less talented bands would plod on worshipping the riff into bong induced monotony until the horse is beaten dead. While that can be cool sometimes, there is also something powerful in respecting then crescendo and emotional peaks that come with pairing such material with pretty much the best vocalist in several genres at the moment (I have been telling people that about Kris for a few years now and stand by it).

“Psychic Wound” is like a tormented lullaby with the most intense screams yet attached to this project and the catchiest melody and riffing as well to date. It is both sensual and also terrifying, like the paint is gonna peel off the walls and gush blood like Evil Dead 2 at any minute (which the video sort of reflects, haha). It has become one of my top three favorite songs from the group (along with “Deny” and “King Of Swords”, if you were wondering). “Morning Star” is completely amazing with the most intimidating and bad ass video of the year paired with chanting at the end that is pure falling from the heavens payoff and will light the fire in any heavy music fan like a ritual torch. Like the new Amenra record De Doorn, you are experiencing total respect and immersion into the artistic process. A little patience will be rewarded aplenty, such as when the six minute plus “Golgotha” showcases this group’s ability to raptly weave dynamics, storytelling and rhythmic shifts into unconventional storytelling that is like a doorway to another land. “Coil” is another standout track, stacatto percussive hits and hyperventilating ushering in a sort of tribal beat and riff that is almost like King Woman channeling Dead Kennedys and anarcho (post) punk. It is big and droning and exciting.

There is really just no one doing it this good right now and KW continue to top themselves. But isn’t that the point of flying closer to the sun, to dare to dream of bigger possibility? This is the kind of shit that people are going to be able to revisit for years and ultimately that will change (and can even save) lives.