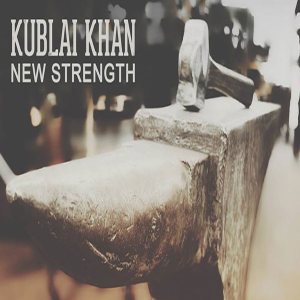 New Strength from Kublai Khan attempts to capture the bands wildfire live energy with mostly succesful results. The band play a particularly low end heavy brand of metalcore that doesn’t skimp in the energy department. They don’t exhaust ears by overly leaning on deathcore breakdowns, prefering rapid attack hardcore and groove heavy, almost borderline nu metal you wouldn’t find out of place on a downset or emmure album. The cool thing about that is that live you have plenty of basslines breaking things up before jackhammer guitars piledrive sweaty crowds, but can it translate onto their sophomore release?

The results are mixed. While some people will certainly find this to be right up their alley and the band are much more driven, pissed off and self-assured than many contemporaries, tracks start to blend together. “Smoke and Mirrors” will surely please modern metalcore fans with an anti-corruption in the industry theme and a full on pitting focus for the whole tune, the roared vocals really convincing you that the band are hellbent on survival with or without your help or trends. “Come Out Of Your Room” is another highlight, with a vicious opening riff that is as aggressive as the heaviest Gideon stuff, for example. It’s probably the most charged up besides the excellent and emotionally raw “Ghost Pains (pt.3)” with the very honest line “I am the product of a single mother.” Fuckin’ cool stuff and reminds me of the power of early Hatebreed.

“Dropping Plates” has almost an identical name to one of the worst Disturbed songs, and I’m not even really a Disturbed hater…but I would’ve shied away from that title. It’s also one of the more forgettable tunes here, just kind of interchangeable with a lot of other current metalcore bands. “Life For A Life” features a cool Mat Bruso cameo, the Bury Your Dead vocalist linking up with this younger band for a rewarding collaboration between a newer and more established act.

The one absolute must hear jam though is “Balancing Survival And Happiness (Pt.1)”, which not only is a great title any musician will relate to, but opens with the heaviest assault the band has ever delivered. I fear what this song will do live. Though the record feels like it was really written more for inspiring moshing at times than anything else. Which is fine. It just means you are better off listening to this all the way through for an overall workout regimen or to get fired up than for a “that was a really fulfilling song” fix. No one song really totally grabs me and leaves me satisfied, which is hard not to write and sound harsh cuz I really like these dudes energy, the dry drum sound and adrenaline in every track. But it really is more of an overall mood album, an experience in anger immersion, than a songwriters record.

Still certainly worth having or checking out if you want an outlet for stress release or a band who spend time on writing lyrics they really believe in. Their is a lot of conviction in these tracks.