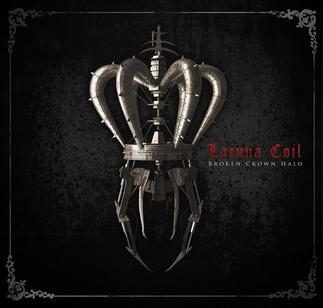 Italy’s biggest hard rock export Lacuna Coil are one of the more polarizing bands in metal, which in their case is a good thing. Unlike 5FdonkeyPunch who polarize because they are genuinely terrible, Lacuna Coil tend to split opinion in the metal scene because they are really good at incorporating pop hooks and
at one point were a bit heavier. Maybe this is cause for complaint in some circles, but  let’s take a closer look here. Broken Crown Halo is just as good as, and actually better, then generally well regarded Karmacode, if maybe not breakout seller Comalies.

“We’ve come to far to give up who we are” sings Christina Scabbia on “Nothing Stands In Our Way”. The song also features some of the heaviest growled vocals from Andrea Ferro in some time. Lacuna Coil know who they are and if you don’t like it, your loss. Scabbia continues to have impressive pipes and the ability to pull of gothic pop mixed with darker nu metal and generally mid tempo hard rock, plus a congenial personality that fans love. Broken Crown Halo finds the group really synthesizing the poppier side they introduced on the excellent Don Gimlore produced Shallow Life (my personal favorite from the band because they stretched their sound and had more uplifting lyrics, though I am in the minority) with their earlier, heavier sound. Dark Adrenaline started this melding but Black Crown Halo perfects the process.

“Zombie” and “Hostage To the Light” feature Scabbia’s best performances since “Not Enough”, with a soaring choruses that defies critique. The only reason not to like it is if you dislike melodic vocals, because the melody and songwriting are proffesionally executed and well done. Lacuna Coil always revive me when I am feeling a bit too bleak, and I don’t mind their “commercial” tendencies. If every record sounded like Autopsy or Aborted then metal would have no variety and quickly lose spark or fail to have a larger global impact. I am glad for a tentpole band like Lacuna Coil who may be a gateway for fans to discover symphonic metal acts like Epica or other hard rock bands. That said, stop the fucking stupid Hottest Chicks Tour BS already. It is really a drag as a Lacuna Coil fan, because it holds the band back and dents their credibility. There is a whole band here, so to just tour around the sexual appeal of the female singer seems counterintuitive to the male and female presence as well as a cash grab. I am not against sexing up music. I love Van Halen “Hot For Teacher” and think it is ok to embrace sex, but the problem is most average goons equate female as a genre unto itself and pigeonhole artists in hard rock and metal with vaginas. Kim Kelly, esteemed metal journalist, has made a pretty effective mini-crusade on this matter recently and I think she is right.If I was ever inclined to rock a Lacuna Coil T-Shirt I would think twice because of the cheese factor associated with Hottest Chicks Tour BS, and that is too bad because it biases people to their music.

Tangent aside, if you’ve liked their past material their is no reason to frown on Broken Crown. It also helps that they don’t have a member named “Pizza” anymore, if that held you back. “Victims” is vintage Lacuna Coil with dark textures married to Marco’s atmospheric keyboards and fluid bass foundations. The real critique here is just that this type of music was mroe in vogue earlier in the 00’s, but that doesn’t mean it is necessarilly bad.”Die & Rise” could sit on any other Lacuna Coil record comfortably. They do what they do with some variation, but the songs are generally quite well written. “Cybersleep” embraces auto tune effected vocals and heavy strong presence that will add to the band’s live atmosphere, while ‘Zombie” is a down tuned fist pumping, hip shaker with a moving guitar solo. The band are all about getting the crowd to move while embracing big emotion, and that is something that is cool if done well.