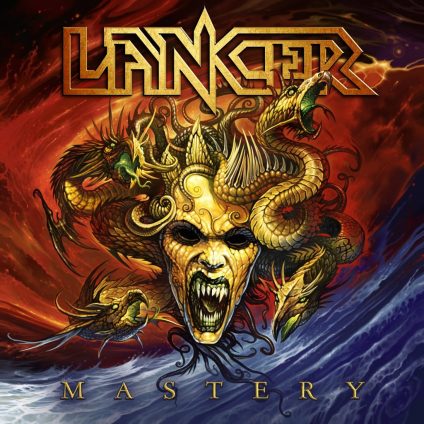 Lancer are sure to break out bigger in the metal scene with Mastery, their first album since signing to Nuclear Blast. Do these Swedes deserve it? The passion is certainly there as are the serious playing chops needed for power metal, perhaps the sub genre that prides itself on skill more than any other maybe besides prog and tech death. Power metal is basically 80’s metal without the sex and with way more fantasy elements, soaring choruses and often insanely ambitious guitar solos that defy human reason. It satisfies geeks and nerds on an almost subatomic level.

Granted, this means the good bands in the genre are really amazing and the bad ones are almost unfathomably bad. Lancer are quite good. I came to this with a bit of a chip on my shoulder because I am such a Stratovarius fan that I never expect something I haven’t heard to tickle my fancy as much in this genre. When Strato’s Infinite or Polaris and, say, the over the top brilliance of Sabaton’s The Last Stand demand so many replays on their own, why waste time on something else?

Well, if you don’t keep an open ear you will miss out. Lancer have a lot to offer for fans of this genre, though some songs are much better than others. The strongest, from the battle ready and very well composed/confident “Freedom Eaters” to the epic Maiden-indebted but by all means rad “Envy of The Gods” or the album opening heavy metal charge of “Dead Raising Towers” are more than worth the purchase. Classic heavy metal is celebrated with aplomb, the band racing through some very demanding sections. Ewo Solvelius and Fredrik Kelemen on guitars pretty much steal the show on many of these numbers, keeping this a very guitar focused journey. The rhythm section are locked in and capable, keeping up but never tipping their hand, though you also get some awesome surprises from the quite thankfully audible bassist Emil Öberg who makes his mark in a jaw dropping way on the aforementioned “Freedom Eaters”, for instance.

Vocalist Isak Stenvall is going to be an acquired taste for some, because he is both quite crisp and clean and also has a naturally piercing edge to his voice. Not saying he is like super sharp or something (though yes he is pitchy sometimes), rather that mainly his high pitched cry is very old school metal with no need for pandering to those who want a little growl in the new school. I personally think he did a killer job and perfectly fits what this band is doing. Fans of Rhapsody or Riot, who are honestly the types to like this the most anyway, will be stoked. “Victims Of The Nile” has an interesting intro that fans of early Queensryche will eat up, complete with soaring highs from Stenvall that show he really aimed for the skies.

The weaker songs like semi boring and unessential ballad “World Unknown” or the cliche filled “Widowmaker” have moments but just don’t set the band apart from a lot of stuff you have heard a million times and sort of curve the album down. It’s just fairly obvious compared to awesome stuff like “The Wolf and The Kraken”, for instance, which gallops the album to a satisfying close musically (though Stenvall sounds like he is struggling in the chorus).

Bottom line, this band are worth your time but I think they haven’t reached their highest heights yet. The potential is really there, however. And you can’t go wrong with any of the guitars on here.