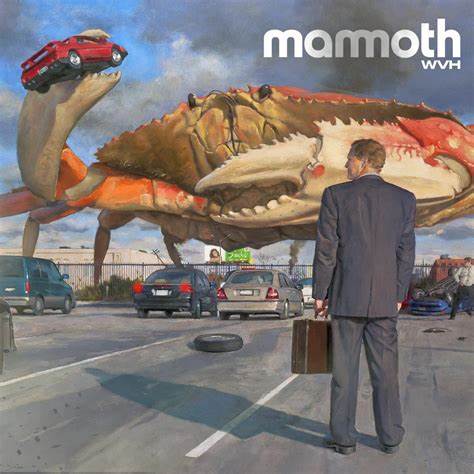 Don’t be worried that the rock scene can’t handle both a Mammoth and a Mastodon, cuz they are entirely different beasts (ha). MAMMOTH WVH is, of course, the long gestating project of Wolfgang Van Halen. It sounds nothing like Mammoth Grinder. LOVING the superb album art, though.

Wolfie teased this baby for like half a decade, it feels like. Recorded at the iconic 5150 Studios, the production is very clean but the tones still sound great for what he is going for. Michael Baskette produced, known for working with Slash, Alter Bridge, Muddle of Pudd and more.

It is impressive that the young multi-instrumentalist pulled off this monster hard rock album in the midst of so much else going on. It serves basically as his “first Foo Fighters” record where so much was done by one person. And speaking of Foos, “Horribly Right” reminds me of them and STP in the stomp department. You can hear the time spent with Clint Lowery and Tremonti really paid off in that every song has catchy as fuck arena radio rock moments with big hooks. The tunes don’t differentiate themselves as much as Van Halen songs, but there is a lot to enjoy.

“Mr Ed” reminds me of Broken Valley-era LOA  and lots of era STP, with a bigger, less miserable radio chorus ala Shinedown. WVH tends towards uplifting and sort of positive sounding melodies, never shying away from harmonies or feeling comfortable with being poppy- but never to a detriment. That is rare these days.

“Epiphany” is my favorite. A big soaring almost Jesusy chorus and piano and a big bridge that made me reminisce on “Right Now” Van Halen memories. Lifting you up to feel grand while still having something to say. “Where were you when it went to hell…”?

“Don’t Back Down” has a ‘Beautiful People’-esque drum and guitar interplay pattern in the verses (fuck Manson, just noticing a similar beat) but the song is basically a huge hard rock bluesy riff fest with very clean, uplifting vocal melodies. So much of this album is meant to propel momentum and make toes tap. Honestly, I get Lifehouse “Hanging By A Moment” vibes from a lot of the vocals but Wolfie has a higher register and is less annoying doing that style.

On the GnR tour the huge ending riff of this tune will blow heads off.

“Resolve” has a beautiful jangly guitar intro Van Hagar fans could get behind. The vibe is very bright and sort of reminds me of “Angel’s Son” by Sevendust (albeit without the sad theme of that classic). The guitar leads tone is just unbelievably crisp and smooth. Of course “Distance” is another highlight and a tribute to his dad, beloved and missed by millions.

All in all a solid and impressive outing right out the gate under incredible scrutiny. It is way more commercial than what I usually hang with, but you have to give props where due. Wolfgang is clearly dedicated and a great dude who deserves all the accolades and appreciation coming his way. I bet these tunes sound even better live!