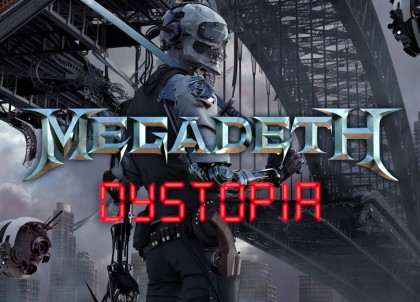 Being a life long MEGADETH fan, I admit that I was devastated in 2002 when it was announced that the band was disbanding due to Mustaine’s nerve issues in his arm. Shortly after, issues between the Daves [Mustaine and Ellefson] surfaced, giving me that feeling that the final nail was in the coffin of MEGADETH, and I’d never get to see my favorite band ever again. Sure, their last two albums had been Risk and The World Needs A Hero, both of which I had liked, but weren’t nearly as strong as their prior releases. It seemed like this was truly the end.

You can only imagine the sheer ecstasy I had when I learned that Mustaine had relearned to play, and was coming back with a new MEGADETH album (2004’s excellent The System Has Failed) with a returning Chris Poland [guitarist from Killing Is My Business…And Business Is Good! and the groundbreaking Peace Sells…But Who’s Buying?). Little did I know that album would mark the start of an amazing “Decade Of Deth”. (Yes, I actually air-quoted that as I typed it. What, you wanna fight about it?) The lineup changed a million times over, but the tunes were all killer during that decade.

2004 gave us The System Has Failed, paired up with the incredibly cool Gigantour in the summer of 2005. 2007 gave us United Abominations, with the amazingly good “Washington Is Next” single. Endgame came in 2009, and 2011 gave us a returning David Ellefson and the album Thirteen. (For the record, the song “13” is one of my top favorite recent MEGADETH tracks). The band was on fire, so it can only be expected that 2013’s Supercollider would be fucking incredible. Am I right?

Ok, so Supercollider was anything but “super”. Definitely the most lackluster of any MEGADETH record to date, but seeing as their first album hit in 1985, their track record so far has been pretty good. I mean, the album wasn’t so horrible that half the band felt they needed to quit shortly after its release, was it? (2 side notes here: First off, if you haven’t already heard Supercollider, it is worth a shot. “Kingmaker”, “Dance In The Rain” featuring DISTURBED’s David Draiman, and THIN LIZZY cover “Cold Sweat” are worth listening to. Secondly, Chris Broderick and Shawn Drover both formed ACT OF DEFIANCE after leaving MEGADETH, and their album kicks serious ass. I suggest buying that one now. Well, not “now”. Finish reading my babbling here, and then go purchase it.)

Ok, those of you still with me, I congratulate you for making it this far. 5th paragraph, and I’m finally getting you to the album review. I felt it necessary to do this long intro for a couple reasons:

1. You need to understand my love for MEGADETH, so that you know where I’m coming from. I had actually written a “Deep Cuts” article on MEGADETH a short while back (Editor’s Note: which in hindsight, it is funny had nothing from THIS) , and had even made it a point of only touching on songs from this time frame because I truly feel that this time period had some of Mustaine’s greatest work.

2. You need to understand how far they rose, fell, rose again, and fell flat with the last release before you can understand just how this album rates. The “Decade Of Deth” I was referring to, as incredible as it was, ended on a bad note, but thankfully, Dystopia puts us back in a happy place, so to speak. I took a very old school approach to this one, and had avoided the leaked album links and YouTube videos. I waited until I had the physical album in my hand, waited til everyone in my house was gone, and sat in front of the stereo so I could read the lyrics and study the album cover as I listened.

The album opens up with the killer “The Threat Is Real” and is followed up by the title track, “Fatal Illusion”, and “Death From Within”. You can see the vibe we’re going for here. Mustaine is back to his political topics and painting this picture of a dystopian future, as the title suggests. The next track, I’ve heard nobody talking about yet, but it’s my personal favorite, “Bullet To The Brain”. “Post American World” and the beautifully orchestrated “Poisonous Shadows” follow, which I consider both to be top notch tracks. If there were to be a new “Greatest Hits” album, I would certainly point out that 4 of these new songs, at the very least, would be shoe-ins. Another key-track worth mentioning would be the album closer, “Foreign Policy”, a cover of the legendary FEAR.

(Punk group led by Lee Ving, who had worked previously with Mustaine on the MD.45 project) Whether or not you agree with Mustaine’s politics, you have to agree that Dystopia is the best MEGADETH record since The System Has Failed. It’s the perfect mashup of old school and new. Giving this one 4 1/2 out of 5 stars.