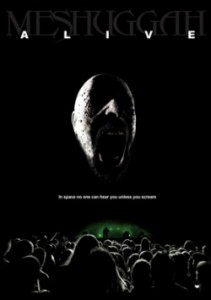 Alive, Meshuggah has officially stepped into this “Infallible Zone.” They can do no wrong.

Most concert DVDs highlight a special performance at famous venue like Red Rocks in Colorado or highlight a particular tour. What some of these DVDs fail to accomplish is give the regular fan who can’t get backstage, a glimpse into life on the road. Alive doesn’t just highlight the best performances across the U.S., Canada and Japan; it opens a window and reveals a band that doesn’t take itself as seriously as it does its music. Accompanied with the live CD, the DVD is packed with extras like the “Bleed” music video and a documentary on its making. Several abstract interstitials give a peek at the band warming up for gigs, drinking backstage or simply interacting with fans.

The glamour of groupies, drugs and other extravagant misconceptions about backstage life are debunked throughout Alive. Instead, the DVD concentrates its focus on the grueling nature of leaving the comforts of home, family and friends for the opportunity to play for strangers.

Ian McFarland, one of the hottest directors for metal videos, does an excellent job of capturing the ferocity of a Meshuggah show. Frontman Jens Kidman lacks the stage presence of the Steven Tyler’s of the world, but his weird body contortions and menacing facial expressions during breakdowns give tracks like “Humiliative” and “New Millennium Cyanide Christ” an added dimension of badass.

Footage from a hometown gig in Sweden would have been interesting, but the DVD relies heavily on footage from Toronto and Montreal. It begs the question: why does Canada get so much love? Kidman goes so far as to yell, “Fuck you all!” when he’s had enough of all the Meshuggah chants (before apologizing sarcastically), but the Canadians just eat it up. It all goes back to my original point that Meshuggah is at a point in its career where they can do no wrong in fans’ eyes.

Even Tokyo gets a couple tracks on Alive, despite being the most subdued audience in the history of concert footage. Kidman jokes at one point asking if he’s in a church because it’s so quiet.

Towards the end of the DVD, guitarist Mårten Hagström muses to the camera that after a tour with Machine Head, he returned to Sweden and felt that it had changed while he was away. Eventually, he realized Sweden didn’t change; it was his perception of it that did. By the end of Alive, your perception of Meshuggah will undoubtedly change as well and it will be for the better.