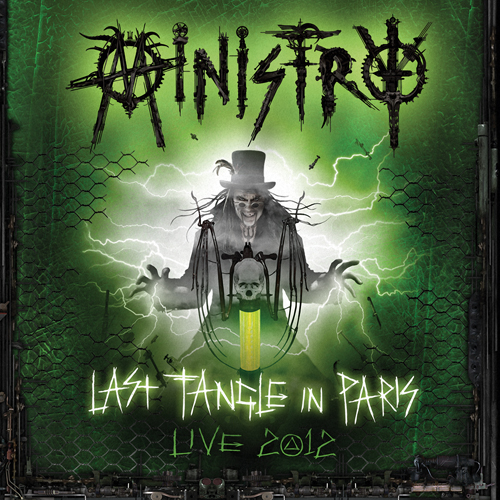 You aint gonna sell every fanboy on the latter day line ups of great bands. I know not everyone is ever going to accept Guns N Roses or Smashing  Pumpkins as they are today, though both are still great bands. I can holler about how great current Stratovarius or how cool the 2014 live line up of Prong is or even Danzig (ha, a double tommy victor shout out), but some chuckleheads will still only desire the original or most “classic” era.This is only appropriate in the case of the Misfits, folks. I don’t even mind the current incarnation of Slayer and think Tom and Kerry found the most perfect people to be in the band if it wasn’t gonna be Jeff and Dave (I’m also giddy with excitement about Lombardo playing with legendary political punk assault team Amen).

That said, perhaps the greatest sin of all is when people crap on the latter day works of the great industrial metal giants Ministry. The band survived like radiated cockroaches through so many twists and turns over the years, never beating to anyone else’s drum. There are many, many great Ministry songs written post Psalm 69. Grow up, people. If you missed out on Uncle Al’s anti George Bush trilogy or the gulch heat awesome sauce satire of Houses of The Mole, let alone “Ghouldiggers” from Relapse (easilly one of Al’s most powerful music industry lampooning songs of all time), you should be on suicide watch cuz the snob thing aint workin’ out so cute for ya anymore.

The final Ministry live touring outfit of Al, guitar speed-blazer Mike Scaccia (R.I.P.), theatrical fan fave Sin Qurin, big man Casey Orr on bass and the hellfire drumming of aaron Rossi, was a force of fucking reckoning I’m honored to say I got to witness in their live glory.“Last Tangle in Paris,” an artistic collaboration between UDR Music and 13th Planet Records, Inc., is set for a July 8 North American release and will be available in 2-CD and DVD digipak, BluRay and 2-CD Amaray, 2 X vinyl Gatefold 160 gram configurations, digital audio and video, and as a simple CD
package. Al Jourgensen is a true ringmaster, a roadshow of karma and philosophy married to tattoos, clouds of smoke and a cheshire grin.

It’s sad to think of Uncle Al packing up and leaving El Paso, but maybe it’s good he’s moving on to other pastures. We all know whenever Jourgensen pops up there will be devil-may-care creativity and mischief sure to follow. Fans meanwhile can remember good times with the classic albums and the latest DVDs. Bangers and Twitchers who enjoyed Live at Wacken 2012 know some of what to expect. The setlists are similar on both releases, but new DVD is mainly filmed as a backstage guide to DeFiBriLatour 2012 and some smaller club footage. I would argue that both Wacken and Last Tangle are imperative, as they document a crucial finale for fans of Ministry. As a result, you get more hyjynx and some good up close and personal camera work here to complete an idea of the last days of the band. “99%ers” is one of the most important rally songs of recent times and every time I hear it I want to remind people, as my friend John The Baker of the band Fucktard used to say “Smash Apathy”. We have to stay engaged and involved, people. Don’t lose heart. Stay resisting and informed.

You can see on this DVD and hear on the accompanying CDs why the band are a six time nominated Grammy outfit, and yet their toxic sauce is really more of a middle finger to the establishment, as accolade worthy as it regardless may be as music. It’s beautiful also that Al disbanded the group after the unexpected death of Scaccia in 2013. It didn’t take a pack of wolves to take down the moose, but rather the death of Al’s true friend. Ministry should end that way, like Acid Bath have respectfully never revived their post-humously legendary band after the death of bassist Audie Pitre. Pantera probably could do a tour w tribute guitarists to Dimebag, but it also is beautiful to leave the legacy alone. Turning up the audio on this Last Tangle… and, baby! You wont be dissapointed. It whams home with lightning fast surety, ready to spark life anew into your fried circuits.

Keep your eyes on the road…