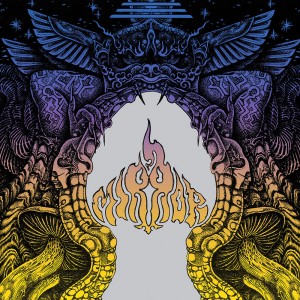 Mirror are a new, classic sounding metal band on Metal Blade who will likely
have a pretty good repeat listening value if you are a reader of this site.
Fans of sort of proto metal and NWOBHM influenced bands like Amulet or Night
Viper, who I often plug, will likely dig this. Throw Slough Feg in there was
well, as there is plenty of guitar worship and riff driven songwriting here.
Dueling guitars and willfully throwback tones with a bit better drum sounds
and other benefits of modern production, but never so clean that the spell is
broken. Plenty of head nodding moments on here.

“Curse of the Gypsy” has a certain, rugged “Highway Star” crunch to the
guitars with spooky laughter and “ahhhh” harmonies zooming out of nowhere for
great effect (think Sabbath’s “Sweet Leaf” looped coughing type vibe). The
band are not on the super doomy side of Sabbath, save perhaps the semi-
Candlemass sounding very awesome “Year of the Red Moon” track and a few other
moments. “Madness and Magik” is pretty darn close in effect and tone to
“Country Girl” from The Mob Rules album though, not like that is a bad thing.
Mirror are just as often akin to Diamond Head’s Lightning to the Nations
though or something like that, especially in the vocal range department. There
is not as much flair or power as, say, Holy Grail’s James Paul Luna or
Huntress’ Jill Janus (if Metallica had made the recent Huntress album Static
everyone would be flipping out but we live in a sexist world). Still, Mirror
vocalist Jimmy Mavromatis sounds like a true believer and certainly is a fit
choice to front this great band.

Mirror was the brainchild of Tas Danazoglou, perhaps best known for playing on
one of Electric Wizard’s most underrated albums Black Masses. Did I mention
fucking Matt Olivo from mighty Repulsion plays on this! It will be a lot to
wrap your head around if you are a fan of the much faster and grimier
Horrified, but who says metal dudes only have to like one type of metal?!
We’re family here in satan’s armpit!

Check the whole album out HERE.