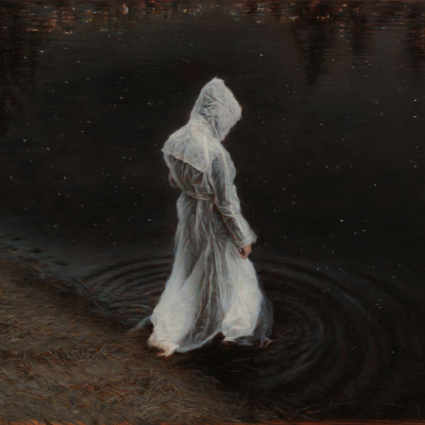 Monolord‘s new record Vænir is the essence of good tone, landscapes of riff and monstous, heaving sonic swirl that will kick your ass. There’s loads of feel here, from the gut punching downstroke hits in “Cursing The One” to the perfectly restrained doom of classic rocker slowed down by deep oceans of smoke second track “We Will Burn”. This rocks like some slow stampede inevitable procession over a cliff that falls through the abyss to thunder to Earth again. It shakes the ground but somehow rise from the dust and keep marching, these songs are BIG.

Like fellow Swede doomers The Order of Israfel, the Monolord guys are really deft at shaping their doom obsessed Richard Dreyfuss in Close Encounters of the Third Kind giant pudding/mashed potatoes mountain sculpture of Riffs into just the right amount of onslaught and chaos amidst controlled form. There’s a similar to Wovenhand/Conan really reverbed the fuck out vocal thing going on and the songs are generally in the not so atypically for the genre nowadays 8 minute + mark. Some absolutely crushing passages like the 5 minute mark of “We Will Burn”, which somehow is the heaviest three note thing you may have ever heard and will make High On Fire/Sleep fans pee.

PR says: Initially formed as a side project in 2013 out of the ashes of Swedish bands Marulk and Rotten Sound – comprising of guitar player and vocalist Thomas Jager, drummer Esben Willems and bassist Mika Hakki – Monolord emerged as one of 2014’s heaviest, loudest and most loved new bands.

“Died A Million Times” is a guitar lovers wet dream of deep, no bullshit reverance. Fans of some of Southern Lord’s brilliant ASCEND stuff or recent Yob will likely super dig on this.

Monolord are early in their career in some ways but if their live show is as on point as their recordings, shit will be ill . Love to see a Lord Dying, Geezer, Monolord type package tour go down sometime once Lord Dying are done touring with mighty Crowbar (here’s putting out hopeful horns to the world). Big fan of the very Spirit Caravan-esque, well paced and doom as fuck drums on this baby. While some might argue this record is getting by on form, they nailed it to the doom cross, pissed on it and lit that gasoline on fire so I certainly can’t complain. Turn it up!