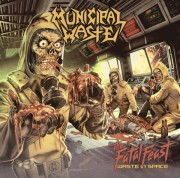 Denim? Check. Leather? Check. Spikes? Check. Studs? Check. Pabst Blue Ribbon? Checked and double checked. My metal brothers and sisters, now is the time to mount your steed, er…I mean skateboard, and gather for battle. Richmond, Virginia’s Municipal Waste has returned with The Fatal Feast, their fifth album of highly contagious crossover thrash. Okay, so there really isn’t any battle going on, unless you count the battle of where to place The Fatal Feast in the hierarchy that is the Municipal Waste discography.

To be honest, Municipal Waste makes me think of Iced Earth. Now before you go calling for my head on a spike, claiming that I wouldn’t know the difference between AC/DC and Cradle of Filth, let me explain. Municipal Waste doesn’t bring to mind I.E. in actual sound or style of songwriting, but in the way that not only can you immediately recognize one of their songs the moment you hear it, but that both bands have achieved a high status and have accumulated a loyal fan-base by presenting songs that are essentially a variation of the same riff. For most bands, this would be certain death, but like Iced Earth, the boys of Municipal Waste somehow make it work.

To use the phrase “a return to form” would just be flat-out wrong. Wrong, because it would imply that Municipal Waste had previously changed style and/or direction. While 2009’s Massive Aggressive was a much more streamlined and thrash heavy album, cutting back on the blatant comedy of previous releases, it was by no means any type of departure to what Municipal Waste was and is about. Those fans that missed the silliness of previous efforts will be happy to know that The Fatal Feast sees the Waste returning to their more humorous, raucous side of neck-breaking crossover anthems. Concerning that comedic side to M.W., drummer Dave Witte was recently quoted as saying, “Party metal is a part of who we are, it’s always been there and will always be there”.

Starting things off with “Waste in Space”, a spooky, slightly other-worldly synthesizer intro, courtesy of Steve Moore (Zombi), the album soon rips into “Repossession”. The first thing I noticed is how vocalist, Tony Foresta, seems to be pushed high in the mix. His vocals are loud and in your face, almost annoyingly so at times. The song itself is obviously a quick, punk flavored thrasher that sets the pace for Municipal Waste to do, what they do best. “New Dead Masters” follows and really shows M.W. kicking it into gear. The song is a scorcher, and will have you banging your head in no time. From the Brian Posehn influenced style of Foresta’s vocals at the beginning, to the tight as a gnat’s ass riffing of Ryan Waste, to the double bass roar of Witte’s drums, or the gang shouts of “till everything’s dead”, “New Dead Masters” simply kicks ass.

Other ass kicking notables come in the form of “Idiot Check” and “Authority Complex”, with their neck snapping rhythms, tasty solos, and fluid bass lines from LandPhil. “Covered in Sick- the Barfer”, is also a keeper, using chunkier riffing that works well in bringing a bit more individuality to the song. “Standards and Practices” is a barn burning thrasher, not only do Witte’s drums and LandPhil’s bass dominate, but ex-Avail vocalist, Tim Barry, shows up to lend a helping hand. The aptly titled “Crushing Chest Wound” is just sick! Again, LandPhil’s bass is just a force to be reckoned with, while the change-ups and breakdowns of both Ryan Waste and Dave Witte are nothing short of flawless. The title track, “The Fatal Feast”, starts with another synth intro from Moore before morphing into a classic sounding M.W. track. The groove of the bass puts a smile on my face every time I hear it, and the triplet riffing is straight up killer. John Connelly makes a guest appearance on The Fatal Feast, and anyone familiar with Nuclear Assault will understand why.

Municipal Waste is a damn good band, and “The Fatal Feast” is a good album. All of the tracks are well written, some more than others, and are full of energetic fun and keep a constant pace, and therein lies my biggest criticism of The Fatal Feast. While all of the elements that make Municipal Waste are present and accounted for, I can’t help but feel just a tad bit bored with this album.

Most metalheads, like myself, were first introduced to Municipal Waste via the Hazardous Mutation album. That release was special at the time, because not many bands were playing crossover thrash, in the vein of D.R.I. and Suicidal Tendencies, and playing it so well. Hazardous Mutilation seemed fresh in a land of staleness. The follow-up, The Art of Partying, was a little thrashier, and steeped in fun, fist-pumping anthems, while Massive Aggressive was a slightly more streamlined affair, that focused even more on a thrash aspect musically, and a less comedic one, lyrically.

The Fatal Feast actually meshes influences from all of Municipal Waste’s previous works quite well, but it just doesn’t scream at me with the same freshness/innovation that their other albums did. The constant pace of the tracks, many flowing directly into the next, hurts this album in the long run. The crossover/punk flair and attitude is something that I hope Municipal Waste never lose , but musically I do find that it lends to a familiarity or sameness that could be broken up better with more tempo variations. The fact is that The Fatal Feast is not a bad album by any means, in the live setting these tracks are going to rip ass, but as for the record, it’s just not anything that Municipal Waste hasn’t already done.