Album Review: My Dying Bride – “For Lies I Sire” 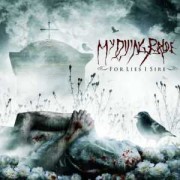 Since their inception in 1990, many bands have whispered the name My Dying Bride in hushed reverence. And while “For Lies I Sire” is their 10th foray into the studio, it is my first foray into the doomed world that is MDB. Guitarist Andrew Craighan told Metal Hammer magazine that the new album would be “heading for empty and bleak with flashes of rage” and that is exactly what you get. The nine dirges pull you along in funeral-like procession through the recessed murk and shadows of the human condition.

Aaron Stainthorpe’s vocals are hauntingly brilliant. Rather than being dynamic in range and style, he uses his voice to emote the sorrow and pain through cadence, letting the music wrap itself around his voice for stunning effect. It isn’t until “ShadowHaunt” that you first hear an expanding dynamic vocal range as the album slowly builds more and more towards that raging of sorrow. You finally experience his true ability in “A Chapter For Loathing” where MDB taps into their black metal roots, where Aaron snaps and growls with the best of them. Though considered a goth-metal band, the lyrics contained here are neither self-righteous nor adolescent as many bands in this genre. The lyrics are dark poetry of the human heart and soul that few wish to explore, as seen in the opening track “My Body, A Funeral” (The ruin of your face/Pours down like lead tears/As you sit by my side/Confess to me your fears/Drink deep the wreck of me/My body is a funeral) ,to the epic closing track “Death Triumphant” (In great Babylon/Right down by the sea/Fear keeps on coming on/Take me far from this dark/Enslave all for the world/End this now, close us down/There’s a portrait).

The musicianship on this album is an evolution in the world of doom and goth metal. Moving beyond the snail march of most, each song has movements that capture the duality of sorrow and grief. The dual guitar work adds a richness to the sound throughout the journey with memorable riffs and moments of reprieve before the journey continues on. Katie Stone incorporates the unearthly sound of her violin in such a way that it becomes an extension of the vocals and the lyrics as the resonating strings seep into your marrow and only slowly dissipates. Her keyboard and piano work is used just as beautifully in “Echoes From A Hollow Soul” and “ShadowHaunt”. What truly stands out is the drum work of Dan Mullins. Too often in doom metal, the drummer is used in a minimalist manner to only maintain a sludge-like pace. Dan works the skins in a way that pushes us through the dark recesses and reminds us that too often depression and hopelessness are accompanied by rage and loathing.

In its refined effectiveness, “For Lies I Sire” is a great introduction to those curious about My Dying Bride or about the doom/goth metal scene. And to those already established fans of either, this album takes both in an evolutionary step that we all can appreciate. This is a truly epic work of auditory art.

More News On My Dying Bride: