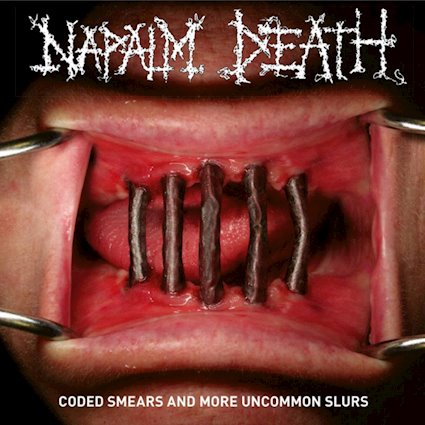 In a time when the world (or at least America) seems to have gone full throttle casting a shadow of STUPID across the face of the globe, it is reassuring to know a metal institution like mighty UK grind legends Napalm Death are as unstoppable and resonant as ever. Coded Smears And More Uncommon Slurs is a compilation of sold out split EP and Japanese bonus tracks, but it feels as potent and needed as any of their skull crushing political diatribes aka full lengths.

From the mid tempo barrage of “It Failed To Explode” from the Utilitarian sessions to the cinematic experimental unease of the almost Fantomas sounding  “Oxygen Of Duplicity” fittingly from a split with the grunge godfathers The Melvins to the 2:27 perfection of “Critical Gluttonous Mass” from the lazy consumer skewering  Apex Predator – Easy Meat time frame, any of these could have held down a place on the records they didn’t make it on and been just fine. There is literally no quality difference, it all rages. Barney, Shane and the boys bleed for this stuff and deliver 100% like nobody’s business – but you probably knew that already if you are reading it. “Aim Without An Aim” is especially unhinged, Barney’s vocals sounding downright demonic even for him.

Napalm Death, you know what you get. Classic sounding riffs that nonetheless push to further the grind into the future, scorched Earth rage channeled through meaningful progressive topics, a contempt for apathy, pulverizing rhythm section madness, dissonance and destruction.

As bassist Shane Embury recently said in regards to the compilation ,”…We have written so many tracks and the years go by so quick that you forget just how fucking great these songs are!”

I gotta agree with the guy. There is not a dud in the bunch, despite the piecemeal approach of a compilation. 2CD, 2LP’s of top shelf grind and extreme metal. You’ve even got a mean Despair cover, a Sacrilege cover and some other goodies. Plus you get titles that are pretty much as metal sounding as you can get this side of Carcass. I mean “Omnipresent Knife In Your Back”? C’mon! That’s rad.

Cheers to the band for remaining in the fight and on the front lines of extreme music and activism for so long. People need to see that kind of passion as a rebuttal to apathy. Such respect for this band.