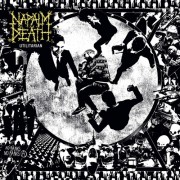 “…each of the four were unto themselves a whirlwind of doom! When the smoke did clear, many thousands were dead. There was much blood and gore. Their bodies lay broken and scattered across the battlefield, like brown leaves blown by the wind. And I saw the four ride together to the top of the hill, while below the soldiers of death assembled all those who would now swear allegiance to them.”

Why did I just blatantly plagiarize a piece of Manowar’s “The Warrior’s Prayer”? Well, because it is exactly how I felt after listening to Napalm Death’s fourteenth studio album, “Utilitarian” (JD’s #1 Pick of February).

That’s right friends, they’ve done it again. Napalm Death are simply one of the hardest working, consistent bands in the world of extreme metal, period. Throughout the last twenty-five years, since the release of their debut album “Scum”, and especially over the course of the past dozen years and six consecutive albums, Napalm Death have proven to the world that they are indeed the undisputed kings of grindcore.

Get the full lowdown here.

Pissed, seething, venomous, brutal, chaotic, and honest, “Utilitarian” finds N.D. doing what they do best, delivering a rage fueled, controlled chaos that is every bit as catchy/groovy as it is engaging. How the core of vocalist Barney Greenway, guitarist Mitch Harris, bassist Shane Embury, and drummer Danny Herrera do it is beyond me, for there is simply not one bad track on this album. Now that is not to say that all of the tracks on “Utilitarian” are necessarily mandatory. In fact, one of my very few complaints with this album is the length of it, but alas, we’ll get to that a bit later.

The instrumental track, “Circumspect”, starts things out and finds N.D. easing into things with a slow, almost droning heaviness that wouldn’t be far removed from a Mastodon or Eyes of Fire album. To be honest, they completely caught me off guard with this but it works marvelously. “Errors in the Signals” chimes in next and delivers the goods and sets the stage for the rest of the album that we expect and know these Englishmen can supply. Like I stated earlier, there are really no bad songs on this album, not one.

From the grooves of “Everyday Pox”, complete with a crazed saxophone performance from John Zorn, to the Fear Factory morphing of “The Wolf I Feed”, to the straight up brutality of “Think Tank Trials” and “Blank Look About Face”, or the awesome clean/chanting vocal work on tracks like “Fall on Their Swords”, the aforementioned “Blank Look About Face”, and “Leper Colony”, there is something around every corner that makes “Utilitarian” a mandatory purchase. The more death metal flavored “A Gag Reflex” is worth the price of the album alone, especially when Greenway and the boys let their Celtic Frost flag fly at the 2:42 minute mark. Kudos must also be given to Mitch Harris for his contribution of vocals, both back-up and lead. His distinct high-pitched rasps strike amazing well on “Utilitarian”, countering the ungodly roar of Greenway perfectly.

Once again Russ Russell produces and he may have accomplished the best production he ever has done for the band. The mix is extremely powerful with all of the band’s individual performances shining through and nothing being buried. Even the cover art is fantastic, fitting N.D.’s socio-political theme, while recalling a familiarity from the band’s early days.

“Utilitarian” is really no different from the last decade of material that N.D. have produced, but if the adage “if it isn’t broke, then don’t fix it” doesn’t apply to Napalm Death, then I don’t know what does. My only real complaints with the album are the earlier stated length of “Utilitarian” and the absence of any guitar leads.

Personally, I think your standard metal album can do what it needs to do in about 30 to 45 minutes and anything else longer can only be pulled off correctly by a handful of bands. My copy of “Utilitarian” is 48 minutes in length, this is counting the addition of the fantastically, heavy bonus track, “Everything in Mono”. While three extra minutes may not seem to be much, it is a bit too long and somewhat exhausting when it comes to Napalm Death’s take on brutality. With a style that can lead the casual listener to claim a “sameness” to the songs, N.D. would have benefited in shaving a few tracks from “Utilitarian”. Keeping the bonus, “Everything in Mono” and removing “Nom De Guerre”, “Analysis Paralysis”, and “Opposite Repellent” would have cut the album down only a mere six minutes, but would have vastly improved the compactness of the album and how the songs hit the listener.

The absence of any actual soloing is really only a personal gripe. I know that grindcore is one of the sub-genres of extreme metal where the guitar lead isn’t a staple to the sound, and not one single track off “Utilitarian” is hurt or made less by not containing any solos. The simple fact is that metal music is guitar driven first and foremost, and that while nothing is taken away from any of the material, I can’t help but wonder what a few well-placed solos could have added to this already impressive slab of grindcore.

Regardless of my miniscule complaints, Napalm Death have crafted a near perfect album in the form of “Utilitarian”, one that will no doubt be at the top of many year-end lists. Nearly twenty years ago, Napalm Death was one of the first extreme metal bands I ever purchased anything from. Seeing how well these pissed off Brits are still doing somehow makes me proud.