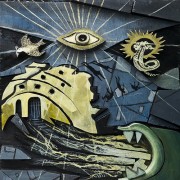 Ne•ro Or•der [neer-oh awr-der]
-noun
a band of primordial, aporetic deconstructionist musicians using contradictory and oppositional sounds in which the sonic blending of their nature of duality creates a singularity of crushing sound that no light can escape

I wasn’t sure what to expect with this album. A San Francisco band self-funds and self-releases a full-length album and then distributes it to the masses for free? I have been reluctantly sitting on this album for a few months, meaning to get to it eventually. I regret the time lost in which I could have enjoyed this auricular affair of dense brutality of doom. If you consider yourself a fan of sludgy, visceral doom metal then you better pay damn good attention to Nero Order. “The Tower” is one of the freshest sounds in the world of primordial doom and harkens to the mid-late period of Neurosis in homage unlike any other.

Find out why here.

“The Tower” opens with a subtle haunting chant with a light strummed guitar melody. The guitar switches to a slight minor key and then – BAM! – Nero Order gives you a swift kick in the face with a concentrated, crunchy rage that shakes you to your core, unrelenting in its intent. “Signs Of Five” closes with a smooth drum breakdown that leads directly into “Celebration Of A Wounding” where the pummeling continues until about a third of the way through, where you receive a slight reprieve with a clean guitar melody. Respite is short lived as the sound slowly returns and builds back up, the sonic vice grip sinks deeper into your being, until the celebration slowly fades into the slim sound of droning guitar.

“Every Pillar And Its Crumbling” is fifteen minutes of haunting desperation, captured in a sphere of bitter rage. Opening with a sharp progressive style riff, the opening quickly becomes laden with the full weight of the celestial mass that is the Nero Order sound. Dual vocals add subtle depth as they alternate with scatterings of spoken, raspy vocals. This auditory adventure of wailing guitars and thrumming guitar and bass riffs gives you cadence and time signature changes throughout the journey until you are left alone bleeding in the ditch, only the drums and vocals remain, a wet mist draped across your wounds. Your eyes close as the haunting scream of remorse and desperation ring you to your foundation. “Leveling” pulls you from the mired ditch and returns you to the menacing world, to only provide five seconds to catch your breath two-thirds of the way. Laced with moments of strummed clean guitar melodies and minor keys, Nero Order is unrelenting to the very end. 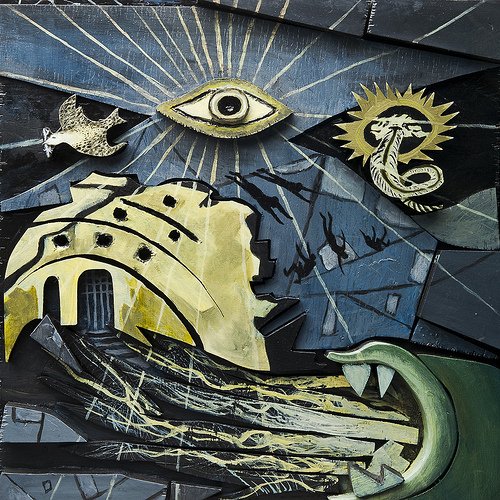 Alex emotes through his vocals with raw, visceral power and shows dynamic ability in range and style, from raspy screams to guttural growls and moments of clean melody, in which he transitions between effectively and efficiently. Matt creates memorable riffs and growling melodies that leave you joyously bruised and battered. Ross’s bass work adds depth with his work of rumbling complexities. Matt creates cadence and time signature changes with subtle force and maximizes his abilities not only across the skins but on the cymbals and hats as well. The production quality is perfect for this type of sound (honestly unexpected from a DIY). All too often bands over or under produce their sound (for various intentional or unintentional reasons), but Nero Order obviously have a vision and know how to achieve it both as musicians and as producers.

I find with great difficulty to say anything negative about Nero Order and “The Tower” except that it is similar to sounds of the past, but they do it so well and in such a way that you cannot escape the gravitational force of their sound, nor do you want to. All I can say is that Nero Order is a band that may very well be this generation’s Neurosis.

In getting to know Nero Order and doing some research, they have guided me a quote that I have been pondering over for the past few days. Therefore, shall I too leave you with this inquisitive truth to contemplate over as I have: “For I am I: ergo, the truth of myself; my own sphinx, conflict, chaos, vortex—asymmetric to all rhythms, oblique to all paths. I am the prism between black and white: mine own unison in duality. – Austin Osman Spare”