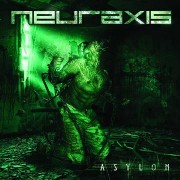 If you call yourself a death metal fan, especially a connoisseur of the technical kind, and you are not familiar with Neuraxis, then shame on you. Simply put, Neuraxis were releasing kick ass tech-death when it wasn’t “cool” and the fact that they don’t seem to get the recognition that they deserve kind of boggles my mind. Neuraxis have proved, especially with 2005’s “Trilateral Progression” and it’s predecessor, 2002’s “Truth Beyond” that they are in fact leaders, not followers in the tech-death scene.

Asylon: Origin of the word asylum (ancient Greek). I only know this because the inside cover of “Asylon”, the sixth and newest release from French-Canadian, tech-death stalwarts Neuraxis, tells me so. A very fitting title, for after spending some time with “Asylon” my mind felt like an asylum might be in need of. Honestly folks, my opinion on “Asylon” has gone from mediocre, to thoroughly impressed, to finally landing somewhere in the middle of the two.

“Asylon” shows Neuraxis cut down to a four piece this go around with only guitarist, Rob Milley and vocalist, Alex Leblanc returning from 2008″s “The Thin Line Between”. I’ve got to give credit to Rob Milley for being able to keep Neuraxis rolling and staying strong, for “Asylon” is definitely just as good as “The Thin Line Between” if not better. The technicality has been slightly raised and the overall performance and feel to the album is furious. “Reptile” kicks things off with a very brief intro and then some slithering riff work that really works well in giving the song a flowing feel, the song continues to meld into a swarm of destruction before its all too quick ending. “Asylum” is up next and goes for the jugular right from the start with it’s intensity and constant riffing change ups, all the while the bludgeoning drumming of Oli Beaudoin covers everything like an enormous blanket. In fact the constant barrage thrown down from the drum department on “Asylon” can be a bit overwhelming. If given a little more breathing room these songs could really stand out more and become a whole new beast, but they often get literally smothered by the sometimes louder than all drum work. The rest of the album’s ten tracks follow a similar path set by the first two, with my personal favorites being “Asylum”, “By The Flesh”, “Purity”, and the more straight forward structures of “Trauma”.

Vocally, Alex Leblanc puts in a commendable job on “Asylon”. His vocals may not be as diverse/dynamic as that of his predecessor, and at times could be interchanged with a multitude of different vocalists without the listener really ever noticing, but I tend to think he is just now finding his place in Neuraxis and what we will hear from him in the future will be much improved. Lyrically, the man is exactly what Neuraxis needs. His words paint pictures of inner desolation and struggles of a bi-polar prison of flesh. They never stray into the typical evil/gore mindset that too many bands still cling on to to this day and that alone makes things a bit more refreshing.

The production of Chris Donaldson (Cryptopsy, The Agonist) on “Asylon” is clean, yet maintains a balanced heaviness that allows all the instruments to be heard while still mixing together as a solid cohesive piece very well, something that can be extremely hard when the music can be so busy and almost overbearing at times. If any real complaints were to be thrown at the sound, it would be that the drums could come down in the mix and let the guitars stand in the forefront a tad more.

Overall, I feel that Neuraxis have achieved what they most likely set out to do, create a brutal slab of well executed, enjoyable technical death metal. The songs twist and turn in myriad of riffs and melodies that keep your head spinning in a glorious way for most of the ride. The problem is while “Asylon” is enjoyable and all the songs have something in them that stands out and makes you take notice, it does unfortunately suffer from what a lot of, if not most, tech-death suffers from. That while the playing/skill level is present and the songs are good, the memorability of the songs is simply not as high as it should be. Not to say that the songs on “Asylon” are a mindless mess of unrecognizable chaos, but that an increased focus on the hooks of the songs could really enhance the material. There are so many bands out there that are putting out albums that show supreme playing talent, but no memorability. I guarantee if an album doesn’t have any real memorability to it, it will not stand the test of time.

Like I stated earlier, I do believe Neuraxis should be recognized as some of the pioneers/leaders of the tech-death scene. Not only that, but I believe Neuraxis could actually be close to claiming a spot in the top tier of death metal acts of today’s current metal scene, if they truly wanted such a title. Neuraxis are going to have to lower the gear of their death metal ten speed if they are looking to push forward and gain more ground/fans. To do this, their next release is going to have to be a step in some direction other than sideways, because as much as I enjoy “Asylon”, and as much as I recommend it to Neuraxis fans and fans of technical death metal in general, I don’t see the rest of the metal scene really giving “Asylon” much of a double take. Sometimes less is more, just ask Amon Amarth, and if Neuraxis can figure out how to incorporate that into their sound and play out some of their hooks without losing their penchant for technicality, and not just switch to a new riff just for the hell of it, then they could very well be unstoppable.