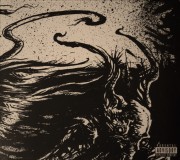 Just a few months back I took a little road trip down to Chicago so I could finally see Prong and Crowbar live (pictures here!). I was not expecting to be provided with such unbelievable opening sets by three unbelievable bands, which I dare say were just as good as the headliners (if not better). One of those bands, Never We See, had only just begun practicing as a live group the week (a week!) prior as NWS is the brainchild of one Tim “Scarecrow” Preciado. I had the pleasure of talking to Tim a few weeks after the show and he was kind enough to send me a promo CD.

Check out my impressions the music contained therein here.

The very first thing that blew me away when I opened up the care package that arrived in my mailbox is the incredible packaging and presentation of this self-funded piece of art – the black-and-white art, accented with a high quality trifold cardboard sleeve, the lyrics published on high quality semi-gloss paper. Not only is the art and overall physical presentation impressively eye-catching but it shows how much time and care went into making sure that this first impression compliments what is contained within and the experience the listener is about to undergo.

Within the first few seconds of listening to the album’s opener, “Sanctity of Secrets”, I was almost immediately reminded of Ihsahn (Emperor), which isn’t necessarily a good nor a bad thing, just an observation (maybe it’s because after our conversation I know how much of a fan Tim is of Ihsahn). This opener is a great way to start the album as it shows off the solid and varied guitar work with its variety of riffs, breakdowns, solos, and transitions. Tim’s vocals lies on a range between screamed and growled which compliments the overall sound well.

The opening half of the album is solid but is the strongest in the last third. “Your Time Is Up” is the seventh of ten tracks and is also the longest song of the album. The opening is thick and crunching with a wailing guitar in the background. The vocals have a dual overlay with lower, more guttural vocals beneath Tim’s standard vocal style. After the mid-song solo the listener is exposed to harsh, echoing whispers of “Where are you goin?”, What are you doing?”, “Who are you?” which is eventually overlaid with a sludgy guitar riff. “Your Time Is Up” demonstrates how NWS does a phenomenal job at transitioning the listener between emotional states with different tempos and musical styles – aggressive progressive to thrashy death to crunchy black.

“Innocence Lost” follows with an interesting guitar riff and bass line and transitioning to an opening guitar breakdown, eventually leading to flanging guitar before opening to a more traditional trash / progressive mainline riff. It closes with the flanging echoes of a guitar melody, which leads nicely into the following track, “Bed Of Reality”, which has another soft opening guitar melody and accompanying bass line. This song shows another side to the intricate sound of NWS with its subtly subdued vocals.

What I like most about bands like Never We See is the difficulty in describing the sound of a band. I can only describe NWS as extreme progressive blackened death metal, which means you really just need to experience it for yourself. Never We See is rife with memorable guitar riffs, enjoyable breakdowns, catching transitions within and between each track. There are only two things that I can criticize this album for – the length and the focus on the guitar and vocal work. The albums ten tracks log in at 1.2 hours, making the average length over seven minutes. While this in of itself isn’t a bad thing, the shortest song is “Dangerous Imaginations” at 4 minutes, 32 seconds and is mostly a piano melody and a droning male chant with its vocals being softly whispered. Yet this song is thoughtfully placed and makes for an impactful reprieve, which is why I make this small little “complaint”.

My second thought is more of a general criticism of metal in general but one I happened to notice on this album – I want stronger, more noticeable, standout bass and drum work. I bring this up here, not because there aren’t moments of this, but because the standout work Tim has created with NWS could be accentuated even further with more pronounced bass and drum work.

With that being said, Never We See is a damn fine DYI demo/album with a solid production that makes for damn fine listen. For those of you in the greater Chicago area, pay attention and check ‘em out live when you get the chance. For the rest of you, take a listen and pay attention.