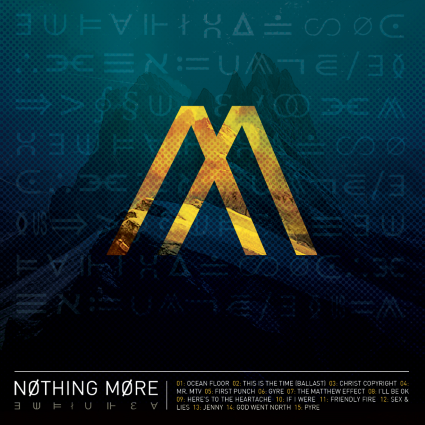 Nothing More are winning converts in the rock world with sophisticated philosophical elements, a wry sense of satire and cultural critique and music that swings between pop emo and psuedo Killing Joke intensity. It makes sense they landed on the Periphery Juggernaut tour along with Evil Ink records artist’ Thank You Scientist and the dudes in Wovenwar. TYS are pretty much Coheed disciples while Wovenwar always wrestled with inner emotions and spiritual elements (think As I Lay Dying’s rise and fall). Periphery are widely considered the leaders of the new school of young prog metal bands (No offense to all the Chicago Sumerian-core bands like Veil Of Maya and Born Of Osiris). Nothing More are perfect for the Juggernaut tour package. Not many bands can citeEckharte Tolle and Dustin Kensrue as influences (and the all is one trip “Pyre” is the best semi secret track on a release since QOTSA’s Songs for the Deaf Acid Bath sounding “Mosquito Song” or maybe even Nirvana’s Nevermind noise bomb “Endless Nameless”).

“Do you feel the appeal?” The soaring vocals Asking Alexandria or Coheed fans love are here, but probably more appealing to the average listener. “This Is The Time (Ballast”) has an opening riff that’s generic groove core but the band gets much more interesting from there.

Bounce, progressive guitar chops and percussive excitement abounds. This is a rare caseof studio wizardry being present but not as over compensation for the band’s already nasty talent (see the nearly Muse epic “God Went North”). When Jonny Hawkins sings “Talk like a man but walk like a child,” on “The Matthew Effect” you’ll feel like he is condemning all the bullies in the world. Meanwhile “Here’s To The Heartache” could tame the savage beast inside any Def Leppard fan with a chorus bigger than any radio dare contain (if radio still existed much beyond podcasts).

“Christ Copyright” covers similar ground lyrically to Alice In Chains excellent title track for The Devil Put  Dinosaurs Here but with much more spastic and shifting music . It’s enough to please Static-X, Enter Shikari or Exotype fans who like futuristic twists amidst highly polished but aggressive production. The vocals sting like the catchiest rants of Billy Talent. I kind of miss the lofty ambition of My Chemical Romance in rock music. Seriously, Coldplay notwithstanding, what big rock band is trying to really think in a grandiose way? Pop is killing rock in this category, though a lot of it has to do with rock budgets these days. I think Nothing More or Dead Letter Circus capably could hold up that kind of reach for the stars type of aesthetic mantle, all while lampooning bastard sons and corporate fathers in “Mr. MTV”. We certainly are empty of inspiration at times, even if MTV stopped being relevant years ago. But that’s the thing…it bled itself dry. There is more than enough fertile ground still in music for true believers (see also the recent Maid Myriad release). This Nothing More album has 17 tracks!