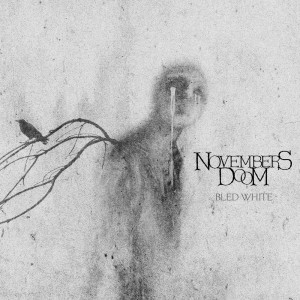 Novembers Doom‘s Bled White is a monolith of the morose riffs and eerie vocals the band is known for, another dark entry into their solid discography.Starting right off with the huge title track, the band kick down the doors and let the storm in. While listening to this band remains a work out at times, it is only because the gloom reaches fairly deep dimensions and not because the music ever grows tiresome. The Chicago band led by Paul Kuhr (with whom we recently conducted a rather extensive interview on the album) have been dishing out reliable doom for several decades now.

The driving percussion of Garry Naples really carries the momentum of this record to bold heights, never letting up but not cluttering the songs. The whole band know what they are doing and aim for the throat. Every melodic-tinged chord is like a poisoned glass of wine, bittersweet and brimming with a head rush of mortality. The band have stayed true to their bleak vision over the years and are finally getting more of the praise and attention they deserve as Stateside doom-pushers. The mix by Dan Swano at Unisound is also highly beneficial to the effectiveness of Bled White, lending each note clarity but not stealing the thunder from the chuggier death metal influenced moments. “The Memory Room” in particular is murky yet gorgeously balances between worlds, like colored shadows cast from a stained glass window in the mind. The song positively aches with longing but in a manly way, not to sound ridiculous.

“Just Breathe” is a dreary and drifting third track which opens in melancholy fashion as Paul reminds a sad and beautiful muse to breathe through bad times and “wishing for brighter days.” The song would serve well as a crowd calmer to bring things down before exploding again. As always the adept use of melody in the big riffs the band use to carve up the choppy waters of their sound yields great rewards. If you have ever suffered serious depression this album will wrap you up like a warm blanket and lend you some statuesque strength from a reservoir deep within. “I can givce you my strength and pick you up when you fall” soothes a reassuring Kuhr on “Just Breathe” before a glorious solo reaches for the stars. Sometimes just having the comfort of a kindred spirit can change the course of a depression for the better.

I don’t know. I was talking to an ex of mine recently and we were laughing about how to us it seems not that abnormal to have had sex in a cemetary. I guess that is weird for some people. It isn’t like I am romanticizing depression or death, but if you have been down rocky roads at times you sometimes carry trappings of obscure or more macabre experiences as a result. Bled White is a record good for reconciling this type of feeling, along the lines of modern classics like LOA’s  River Runs Red , Daylight Dies’ Dismantling Devotion or Acid Bath’s When The Kite String Pops. While this music is certainly downcast, there is also a yearning that trancends the darkness and lends more potency to one of the greatest of 2014’s doom genre releases. A combination of delicate calms, gutter violence, hopes and tragedies both personal and external. But it isn’t long before “Unrest” settles in again and we have to move on, facing the dissapointment that some tranquility is far too fleeting.