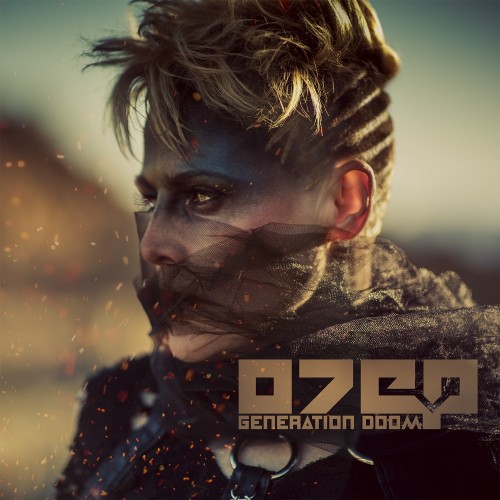 Back in 2013 when I wrote about Hydra it was thought to be the last album we would see from metal poetess Otep Shamaya.

We now know that this isn’t the case. OTEP is preparing to release Generation Doom on April 15 via Napalm Records.

Check out my full review of this latest tome of brutal honesty from the ever-candid Shamaya & Co. here.

Generation Doom starts with a cold-cock to the side of the face. “I DON’T GIVE A FUCK!” Otep shrieks in her trademark way of making our ears bleed while we slam our heads.

“You want me to disappear, but I won’t go away!”

In the first song “Zero” OTEP melds perfectly the personal with the political. “The house is a disaster and the car won’t start // I want to pick a fight but it’s just too hard // I’ve got no motivation, I should just give up // They say I’ll burn in hell but I still don’t give a fuck!”

If you’ve been spinning the track off of your old OTEP albums waiting for a new one, you definitely have nothing to fear and no more waiting to do. This is OTEP as she always has been. Always more brutal. Always more harsh. Always more angry and always ready for a fight.

The second song “Feeding Frenzy” starts off with some loud fuzzy guitar mayhem. Shamaya insists, “You’re fighting for some holy war // don’t fucking pray for me // because all your hate just makes me stronger.”

The third track “Lords of War” starts off with a sampling before Shamaya spits poetry at us. “More wars on foreign shores // more names for us to mourn // to misguide the misinformed // to ignore the sick and poor.”

2009’s “Smash the Control Machine” had the line: “We’ve become a nation of wolves ruled by sheep // Owned by swine // overfed and put to sleep!”

It’s the fist-pumping battle anthem of a generation and class of kids whose siblings, cousins, parents, aunts and uncles are off to war while the politicians here are telling us it’s illegal to take a piss and every night The Never-Ending Election marches on like Everyone’s Favorite Reality Show and it’s already been renewed for the Next Season.

The odd point on this album is the Lorde cover. That’s right, OTEP does “Royals”. But ‘odd’ doesn’t mean ‘bad’. Certainly it takes away from the level of anger and the lyrical themes of the rest of the album – but Otep makes sure to make it her own.

After “Royals” OTEP delves into the softer “In Cold Blood”.

“Something’s wrong with me for thinking something’s right with you,” she sings. “Now I’m lost inside the smog, choking on the shame. It tastes like suicide, a sweet death I can’t deny.”

The next track, “Down” has a unique sound as Otep starts in, “All my life I was told that I was evil // All my life I’ve been living illegal // I’m the one that they love to hate ‘cause I’m half Mark Twain and half Jesse James.”

This song will be amazing live. It’s wicked as fuck, worth screaming from start to finish as we pump our fists in unison.

“God Is A Gun” is a song title reminiscent of Marilyn Manson. But that’s where the similarities end. “God is a gun and the bullets are free!” Otep screams.

And I think she expects an answer. And I don’t blame her.

In “Equal Rights Equal Lefts” the lyrical composition reminds me of Hydra. “He called me a dyke // I called him an ambulance.”

I think this song is as important alone as it is in the context of coming out in a country where gay/same-sex marriage is legal. That is to say, the fights for equality continue.

“Coming out swinging,” Shamaya whispers in her patented way before breaking into the rap: “I am a pariah to every religion // it isn’t a choice but it is a decision // come out of the closet break out of the prison // love who you are let no one inhibit // don’t get in your way or make the mistake // of living in fear for the rest of your days // so tighten your fists and firmly say the following phrase // he called me a dyke I called him an ambulance // I can make you famous too // but you tremble at the thought of that.”

And I use that word rap and I think it’s important. I was hesitant to call it rap at first but I think it is an important part of this album that this isn’t like nu metal or hip hop as I see it, but rap in Shamaya’s own unique way. And it fucking works.

Overall the album is very unique and powerful. I’m glad that OTEP took some time off, because it paid off in this album. There’s a lot of important energy and a lot of things that Shamaya wants to say – and I think we should all listen.