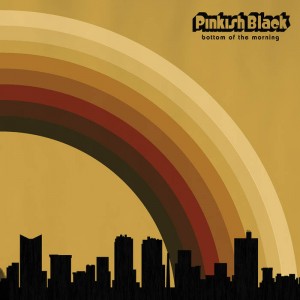 Pinkish Black‘s Bottom of the Morning is a decidedly low key but brilliant
release from Relapse and the Texas based band. Much more akin to the (current
tour mates) Zombi side of the label than the Suffocation side, PB are an
artful and smart band who create often lengthy but never boring synth based
band with droll vocals which nonetheless have an insistent emotional impact.

The title track is a cool dream that whirls like slowly whipped cream around a
vertiginous yet repetitive refrain, building and taking away in layers
including at times rising to a fuzzed out stomp. Much of the music snakes and
teases this way, somewhat akin to Krautrock or electronic Radiohead but
perhaps not as minimalistic and with more of a cultish (and cultivated) sense of menace.

Maybe if Mark Lanegan was really into Tangerine Dream? I dunno.

The songs are actually deceptive in that they
have a lot more elements than you might at first remember, since a casual pass
is more hypnotic than “woah, go back to that part!” in general. But every song
has numerous rewards from horn sounds to cinematic 70’s art film style
disorienting textural key strokes or almost imperial moments of august and
celestial import. Some of it is even oddly No Wave.

The Fort Worth band are very interesting and anyone who enjoyed the soundtrack
feel of Goblin Rebirth’s record or who likes rock a bit more brainy that still
has a certain moody allure will dig this. It’s like an at times challenging
and hallucination frought semi-grandiose withdrawal from some womb-like Philip
K Dick-esque state sponsored pill of conformity. Challenging but in the end it makes you
wiser and glad you shed the brainwash. The songs take on a landscape of their
own, even when they drift into almost background music at times due to a
lulling nature of some of the more repetitive parts (“Brown Rainbow” has a
particularly hypnotic march) you suddenly are swirled right back into the dead
center of this oddly all seeing eye.