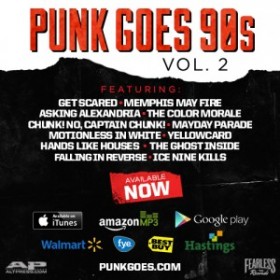 Oh Nostalgia, how you hit me while listening to Fearless Records’ latest Punk Goes 90s Vol. 2.

While listening to this entire album I felt like running into the depths of my garage to find all my old 90s objects, Pokemon cards, Togs, and Lite-Brights. It would only make sense to have the best 90s objects while listening to a collection of songs that created the perfect 90s play-list.

I enjoyed this album to the fullest. I was almost too happy to hear old songs like “All Star” (originally performed by Smash Mouth) given new life by Chunk! No, Captain Chunk!

Some of the specific tracks that stand out in my mind are:

Yellowcard’s version of “Today” and Memphis May Fire‘s rendition of “Interstate Love Song.” These were songs I thought the bands would have a hard time covering, but the bands managed to make the songs their own without losing the original creator’s artistic intentions.

The Ghost Inside did a fantastic job of covering P.O.D.’s “Southtown.” The Ghost Inside’s cover is my personal favorite on the album. They did complete justice to the original.

I did find some of the bands that chose to cover the songs interesting. For example, Falling In Reverse decided to cover a Coolio song. If that’s not out there, I don’t know what is. The decision to cover a Coolio song is brave period. It was the only song on the album I wasn’t completely happy with.

Thank you to Tim M. for reaching out.

To keep up with all things Fearless Records check out their Facebook page and remember to follow them on Instagram: @FearlessRecords. Also, if you haven’t already picked up the album, head to the Fearless Records webpage to find out where to get your hands on a copy!