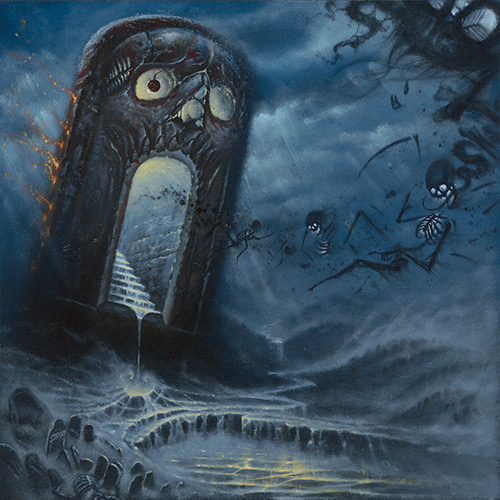 “It beckons to me, a being of immense and terrifying power”, growls vocalist and underground guitar hero David Davidson on the towering and dark spiral “Madness Opus” from Revocation‘s latest full length Deathless. Ever since the band became a 4 piece in recent years they have been proving it is clobberin’ time more and more with each release, though everything in their back catalogue is fucking intense and fun tech death with hellacious grooves. Revocation maybe don’t have the vocal dexterity of some groups but they are quickly becoming a near-perfect modern metal band anyway the last few years. If I was on Skull Island and only had this bad boy, I probably wouldn’t complain too much rocking out to this while King Kong chased me or maybe stopped to throw horns and skull punch a giant dinosaur. “The Blackest Reaches” adds more eerie chords than ever before to the band’s patented attack and the lean sense of purpose all their record’s share is still thankfully there, just bigger, stronger and dare I say…faster?

Guitar heroics and blazing leads welded to thrash parts and aneurism causing patterns with major groove take this release to another level. It is a bit stronger than their recent self-titled effort, though “Invidious” was maybe the funnest single they have released since “ReAnimaniac”. Still, this record overall takes things to another level for the hard working band and strikes a serious tone. The production from Zeuss and the jaw dropping performances here put this band up amongst the new school of greats at last, their tour chops psychotically evident on this. Deathless could stand against or with metyal from any era, however. “Scorched Earth Policy” proves they still are topical and relevant as well and that “Entombed In Wealth” and the band’s kind of subversive political moments in the past are no fluke. “The Fix” broods that “A system designed with controlling intent cannot be changed from within.” Mid term elections, anyone? The pendulum swings yet again in a parade of corporate sponsored clowns. Still, this is overall more about insanity and revering the many strains of thrash and death than anything else, and these guys bring the party. Staggering sections that would make Chuck Schuldiner (arguably this band’s biggest forefather) proud abound. Fans of Skolnik and Peterson will also be thrilled at the sweeping team work between Davidson and co-guitar bad boy Dan Gargiulo. When Davidson barks “Welcome to the new regime”, you are going to believe him.