The Italian symphonic power-metal band, Rhapsody of Fire released “The Cold Embrace of Fear – A Dark Romantic Symphony” as an EP in Europe last October. The band decided to work on one lengthy seven-act orchestral song, which includes the Hammer Horror film veteran Christopher Lee who is well known for the roles of Count Dracula, Count Dooku in Star Wars episodes II & III and Saruman in The Lord Of The Rings film trilogy.

“The Cold Embrace of Fear” begins with a small group of adventurers including a wizard and an elven king who while on “The Pass of Nair-Kaan” fall victim to an avalanche. They are on a quest to find the secret place behind a lonely mountain fortified with ice rocks, which holds the book of Erian. The EP focuses on the group’s effort to attain the sacred book but then counters with a twist of betrayal.

Rhapsody of Fire, have been releasing great material for over 14 years and although this EP isn’t the best example, it’s still worth adding to the list of great material. “The Ancient Fires Of Har-Kuun” is a perfect example as to why this band continues to remain on top. At first the song opens up with an orchestral instrumental and continues with a female’s operatic vocals in the background. Within one-minute and thirty seconds it would be made clear that this track alone was going to be a 15-minute epic. Luca Turilli launches a raunchy guitar riff which transitions temporarily into an Italian ballad sung by Fabio Leone until he screams the words “Har-Kuun!”. The song is filled with great melodies on everyone’s behalf. Alex Starepoli’s epic orchestral sound on the keyboard gives atmosphere to the quick and steady-paced drumming from Alex Holzworth and Luca’s neo-classical solos. Fabio’s voice continues to enthuse the listener with his high-pitch vocals and ominous lyrics.

Now, is this album as great as their last LP? The answer is no. “The Cold Embrace of Fear” will not satisfy all power-metal fans but if you appreciate the cinematic elements that are evident within the album and are open to letting this EP take you to another world then chances are you will enjoy it. “Erian’s Lost Secrets” was another song worth listening to that had a triumphant, mid-tempo sound. This album deserves to be given a listen to and Christopher Lee never fails to narrate with his classic presence as you’ll notice as he takes the role of King Uriel on the final track entitled “The Angel’s Dark Revelation”. 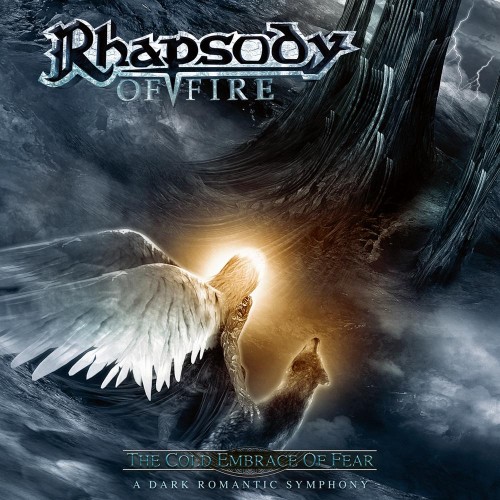