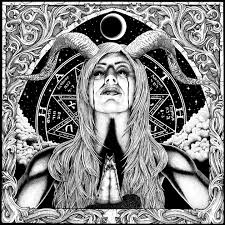 There is a healing image spell  used in practical Witchcraft that involves creating a wax or cloth poppet to represent the person you wish good intentions towards. You don’t represent the problem, rather the image of the solution is created.  Cast a circle and light a blue candle. Sprinkle the doll with salt water. Well, the spell goes on from there with positive intent. The new Ringworm album Hammer of the Witch, on the other hand, will leave non believers  as a steaming crater of human afterthought. You will need self healing from self inflicted mosh trauma after hearing tracks like the pulverizing slow death rattle of “Leave Your Skin At The Door” or “Dawn of Decay”‘s declaration of malicious intent.

13 tracks of pure ferocity showcase that Cleveland’s finest musical export (well, except for Denny Blaze) are as strong as ever. I was a bit surprised that this new album came so hot on the heels of Bleed, but none of this is rushed. If anything, Human Furnace and co. are at the top of their game. Granted, occult imagery is more rampant in metal and hardcore than ever,  to the point where you can’t shake a smudge stick at a bunch of average dudes in sweatshirts who for some reason use upside down crosses or Wiccan ritual symbols on their album art. Shit, every other day a new band of 70’s throwbacks with female witch vocals comes out as well. This is not necessarily bad as “Black Hexen Rise” by Integrity or the nuanced music of Blood Ceremony proves, but sometimes it is just a bandwagon. Ringworm have never had artwork like Hammer of the Witch before, and I don’t know what it has to do with the rage fest on here that seems pretty embedded in urban reality and the brutality of the modern age, but I’m not complaining. The artwork is dope and the record kills.

Ringworm are a band like All Out War who are finally getting their due more for helping kickstart the metallic hardcore thing. There was crossover in the 80’s, but the real metalcore thing started with those bands, Integrity, Overcast and the like. 18 Visions and all the other punks came later, no disrespect meant, but let’s get real.

“Psychic Vampire” is a relentless mosh fest of double bass, vicious soloing, cracking snare and bellowed hostility. The whole record is non stop. I remember what I used to love about seeing Jon Spencer Blues Explosion (clearly a MUCH different type of band) was that they’d never stop for more than  a second between songs. The new Ringworm is similar in that it doesn’t give you a moment to breathe, just hammering home riff after orgiastic, monstrous riff. Groove, circle pit and breakdowns plus classic half time chugga shit…it’s all here. If you make it to “Die Like a Pig” without at least emotional bruises, you’ve got some thick skin.

I’ve been pretty much binge watching The Walking Dead because I haven’t had Netflix the last few years. Obviously Shane has been gone for a few seasons now but while he was loathed by some fans, I felt like his character (before heading too deep down the path of moral “no return”) was a hell of a lot more practical and less delusional about the people who tried to hold out hope for people bitten who hadn’t turned to walkers yet. Shoot those fuckers. It is sad but, c’mon! This is the zombie apocalypse. It’s like when you are driving and hit an intersection and the person whose turn it is to go waves you forward instead and interrupts the normal flow. Dude, you aren’t helping! You actually made it take longer while people figured out what the fuck you are doing, bad driver! Anyway, Ringworm is here to strip us of our wrongful convictions and sunny notions blinding us from harsher truth.

Stream the whole beast of a record HERE.