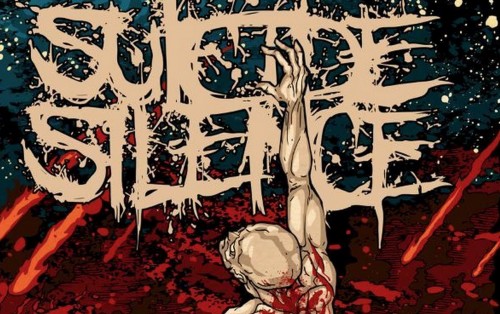 When I first wrote about “Sacred Words” when I reviewed You Can’t Stop Me in July 2014 I knew the track was brutal. So I’m stoked that Suicide Silence released a single for it.

Check out my full review of the EP here.

After the EP opens with the title track, the live tracks begin with “Inherit the Crown”. The lyrics of this song still give me chills. I wrote about it back in 2014:

“Inherit The Crown” which I was immediately convinced was a nod to Suicide Silence’s and Mitch Lucker’s last album The Black Crown. “A crowd so lost when you fucking left us // A public without their lungs // Your relentless prowess helped so many // Your memory will never be lost // Let me be your new foundation // Stone and iron make up these bones!”

The music critic in me could say that Eddie’s vocals don’t translate as well live as they do in the studio, but honestly the effect of the music comes across and I still find myself pumping-fist, so fuck it. Also this is a live album, if you don’t like the way live albums sound, this wouldn’t be for you anyway.

Eddie opens up the live version of “Cease to Exist”, “You know what this means? You know what this fucking means?” Exemplifying his crowd control to a crowd that roars back at him. I originally said that this song wasn’t a standout track, but it really has grown on me.

In my perfect dream world, I’d love to get a live version of “Control” complete with the vocals of Corpsegrinder.

In lieu of that, getting a live version of “Sacred Words” obviously makes sense. Eddie does not fucking hold back on the intro to the live version of this track. Fuck. Everything about this band makes me remember why I fucking love heavy metal. The fucker says, “Alright. I want to send this next one out to your parents. Your mom, your dad. Maybe your grandparents, your aunts, your uncles. Whoever the fuck in your life made you feel like right here is your home. This song goes out to them!”

Eddie saves the best of his live capability for this track. Growling to screaming of course we know this motherfucker does it all, and he does it skull-crushingly well on this track.

The “Sacred Words” We Are Strong remix isn’t my shit, but I’m picky about my remixes or really electronic music in general.

Last but not least, to close out the EP is the “Sacred Words” instrumental. It’s nothing new or different, it’s just a different look on a track that’s been seen in three other forms already on the EP. It’s no surprise that Suicide Silence’s sound is tight and chunky. What does stand out in the instrumentation for this track though is the long moments of proggy atmosphere-building that occurs between chugs.

For $3.99, this is worth the purchase for Suicide Silence fans and other general audiophiles. I was going to say for the more casual fan, only pick up the live tracks, but you only save like twelve cents that way. If you buy nothing else from this EP, get the “Sacred Words” live track, the opening by Eddie, let alone the bludgeoning lyrical themes, make it worth your time and money.