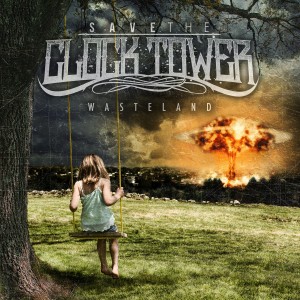 About two thirds through album highlight “To The Dreamer” off Save The Clock Tower‘s new Wasteland album is a lyric that says “we find in time, there’s no one else to blame, we are the ones holding ourselves back”. Unfortunately, the lyric rings all too true for this album. How many more duh-dun-duh-dunananananana-dunh-dun-dun riffs do bands need to churn out. There is virtually no edge to metal core as a genre anymore. It takes serious sifting for a diamond in the rough and this is not it. Flat drum sounds and washed out guitar tones with nasal and flat melodic vocals, the occasional semi-interesting falsetto that goes nowhere unfortunately and, worst of all, screaming vocals that are interchangeable with dozens if not hundreds of similar bands.

“Sanctuary” is the epitome of everything wrong with this album, so of course it is the lead single. I hate being a dick, but this does not stand out. There are some cool moments like what sounds like a toy piano at the end and some sheets of melodic and ambient guitar that are cool, but try listening to the djent regurgitation of “The Beautiful Lie” and not feel like the lie is that this is original at all. I love This or the apocalypse, who this band sound somewhat like at times, but the difference is those guys throw in a lot more twists and turns and write political lyrics with a ton more bite. If I saw this band live I could nod my head, but I’ve been listening to old school shit like Dagnasty, Fugazi and Big Black lately and this new school “underground” just does not have the same chance to seriously change things. Bands are just too fucking complacent. The scene is a Wasteland because bands fucking copy one another! I want to hear Amen Ra or the actually urgent punk of Pissed Jeans take over the world, not this carbon sound that has been recycling around the last ten years.

I love the new Those Who Fear album. You know why? It has some weird as surprises and rhythmic risks on it. That is awesome for a Facedown band. “The Way We Were” admittedly has some really cool palm muted and chugga tones with weird glitchy shit going on and the best falsetto spacey parts on the record, but it still barely makes the hurdle. I feel like I have been shitting on Bullet Tooth releases lately but I mean, c’mon! You guys put out Death Ray Vision! That means you KNOW what a good band is. So just fucking stop it.

This music, which is supposed to be super engaging, is being delegated to basically muzak through a constant watering down. “These Diseases” starts off with some Thrice-esque roar and feels the most passionate. It even has some choral type gang female vocals at the end. Still, that highlight (including really cool keyboards during the middle of the song that haunt the production like a broken promise) can’t save the whole record. While the band may be doing what they love, it has been done before. A lot. “Hope, Sweet Home” also tried to save the clock tower album with some creamy balladry, but it sure aint the new Polar record. The electro flourishes are kinda neat but just not enough to make me want to come back to this. When there are so many classic albums already out, you better put everything you’ve got on the table, kids!

Album art is cool, though. But I’m gonna go back to my Haulix now and find something else to listen to.This shit bummed me out.