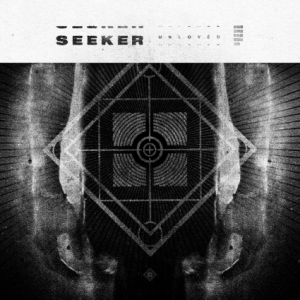 Texan death metal influenced insano-core band Seeker are aiming sights on improving the metal scene on their upcoming Victory Records label-debut Unloved. Texas has some great metal and hard rock from Turbid North to Hawk Vs. Dove and Seeker really explode. Much like the fun to zone out to Transformers: Dark of the Moon showed us an alternate reality where major acts in U.S. history such as the moon landing were truly linked to a Decepticon cover up, Seeker’s Unloved shows us an alternate reality where deathcore didn’t become a joke and instead reached full fledged/hostile potential. Combining whiplash percussion attack and speed reminiscent of (now label mates) Blackguard with crushing “core” mosh ala The World We Knew and genuine anger, Seeker stake one potent claim as a new heavy band to watch.

The opening twin assault of “Alone” and “Pale Death” impress, but it is the third and title track where this album truly takes off into pure awesome country. Angular and churning aggression married to relentless clanging tones straddling noise, death and hardcore effortlessly. They aren’t as “death” in an old school way, much more core…but the band are smart. This album feels like a hard work out and you can’t help but want to vent your shit when you are force fed the of heavier than Oceano interlude “Regret”. The drums are kind of processed sounding in a Sleeping With Sirens almost crisper way but it doesn’t distract and the kit sound works pretty well for their modern approach.

The vocal approach gets a bit repetitive but it isn’t really a problem, as the band radiate genuine urgency. I overuse that word but it is because in today’s metal world you need conviction in your sound to stand out. Buzz, sweep, machine gun, scream, kill. You get the idea. But this shit has something extra. Seeker feel like they ARE seeking, and not just a good mosh breakdown. Perhaps it is the sheets of texture that appear as backdrop in “She” or the hurt your neck raging and watch out for flying feet intensity of the opening of “Pale Death”, but this band has “it”.

Kudos to Victory for this and the recent Counterparts album. They could be farting out turtleheads like some of the astonishingly bad mall band signings Epitaph has done, but instead we get the pretty bitchin’ Unloved. Horns up as fuck!