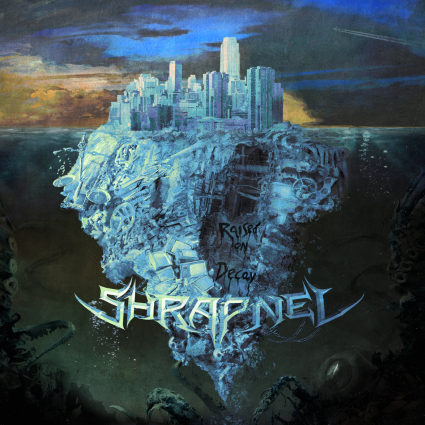 Daaaamn. Shrapnel are back! Raised On Decay (Spinefarm) is a big next step for the British thrashers after a good, if flawed, debut The Virus Conspires. You can tell they have been working hard because the new record increases all of their strengths and you can hear the band finding their own voice a little more. They were never bad but they are becoming who they were meant to be. You can hear it in the explosive 2:28 mark of “Echoes Of Emptiness” as they transcend the confines of an otherwise rad thrash song into full guitar solo glory and then a truly unhinged bridge that will satisfy Death Angel and Kreator fans alike and proves they can match the intensity of Warbringer and Battlecross when they assert themselves fully.

There is a lot of bad ass riffing here. “Jester” doesn’t even have to demand your attention because it has it. A hard charged riff slips into a super bad ass extended tom roll section and then we are off to the fuckin’ races. You can tell these guys are deeply invested in the music and set to prove they deserve the big time. Man, they need to be on the road with Testament or Shattered Sun like RIGHT now!

“Choir Of Wolves” is an example of a slightly weaker cut, though the song title is cool. An almost Queensryche intro with evil sort of bordeline campy King Diamond dark talking vocals (might have been better instrumental, frankly) sets the stage for a very militaristic sounding song that has some clobbering tones and great moments but is mostly held together by the stomp tempo and the great lead guitar. Other songs are more on point all the way through, in particular thrash fans will fucking delight (there is no other word) to the speed and skill excess of “Carved From Above”.

I dug this band when I first heard them and highly recommend this for a band who you feel like you can sort of be a part of from the ground floor up. I sincerely hope they stay going and make a handful more records after this, cuz they are really having an extended musical moment of greatness here for the vast majority of the offered tracks.