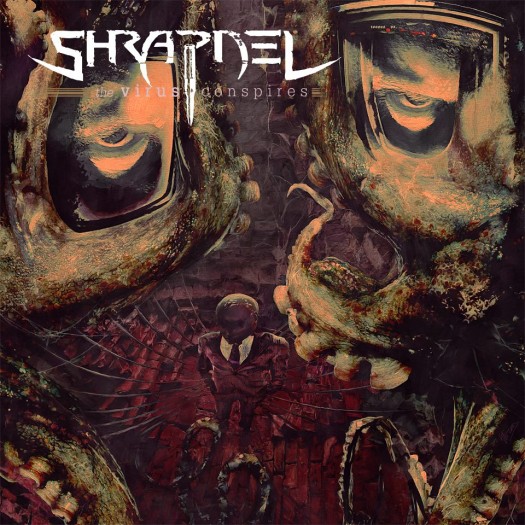 I (sometimes) get sick of every other metal album needing to start out with a spooky intro track of ambient noise, war drums or wolves howling before the music kicks in. “Oden’s Ride Over Nordland” will always be cool, but not every band is Bathory. I mean, I guess it is just part of metal, like how rap used to have skits between songs more often (like Redman, Wu Tang and Eminem or lots of older acts). It is nice though that after just five or six seconds of cool anticipation building noise, Shrapnel get right down to business on their Candlelight debut The Virus Conspires. Killing is their business and business is…sounding a lot like Reign In Blood Slayer with a few Testament Practice What You Preach half time grooves thrown in (particularly well during the blazing solo section of album standout “Titan”). Shrapnel are pure thrash and nothing much is new here, but they really do execute the material very well. This is a tight, machine-precise band with their teeth at your throat. This is metal built to impress live and to pad out your record collection with reliable, go to thrash. Like Untimely Demise or Lazarus A.D., most metalheads will be able to grasp onto something familiar here but be stoked it is a new band with solid tunes. Hey, I get it. Not everyone is going to be able to get into Locrian (maybe if there were more shouted backup vocals? haha). “Braindead” has a monster Exodus type groove riff and burly production, with snarled vocals about “a brainwashed fucking mess” courtesy of Jae Hadley.

The tricky part of reviewing a record like this is considering what merits you are judging it on. Production? Pretty awesome, angry but great tones. Delivery? The band are true believers and fucking kill song after song. Not a bad song on the record and adept guitar solos all over the place. Originality? Not much. This is tried and true aggro-thrash, not of the sillier Municipal/Suicidal variety but more akin to the bands already cited above. Is the scene in any way diminished by having Shrapnel around? Hell no. They are awesome. You just have to decide if this is your cup of tea. Some people will always be looking for some thrash like this to get the blood boiling, and the band can hold their own with Bonded By Blood or any of the upstarts recently blaring from speakers around the world. They are better than some, hitting the nail on the head more often than the not so consistent Diamond Plate, for example.

“Pseudo Commando” is a great mix of all the band’s got going for them, starting with shimmering classical sounding guitar that soon charges into full war mode with rapid fire lock step percussive/riffage hate making. Again, the mold is not being broken here but it is certainly very metal and worthy of support.