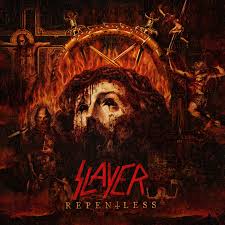 I have not really been able to stomach most of the reviews or negative attitudes towards the current incarnation of Slayer since Jeff H. died. Do you really think Hanneman would want us all turning on the band he was in for so many years? I can’t blame Araya for singing “Pissing match of egos” on the thrash-tastic title track of this latest entry into the band’s storied discography. Personally I think people are really easily swayed by band wagons these days and you get a few trolls or bad reviews up and running and suddenly no one thinks for themselves.

I’ve written for other sights about how I prefer Katy Perry to Taylor Swift any day, but essentially at the end of the day it is about personalities. Pop music is mainly written by three or four people! Wake up! We are part of a still thriving underground and it is weak that Mayhem Fest had low turn out this year just because a more commercial band like A7X wasn’t headlining. But below the surface of the mainstream all we get is a sea of fucking arguing.

While Kerry King’s comments about the Mayhem Fest this year divided some fans, the infighting in the metal scene could also be pointed right back at plenty of more closed minded Slayer fans who will only accept the classic line up. I love the current Slayer and think they did as great a job as humanly possible with Paul and Gary. Really, could anyone be as good replacements for Dave and Jeff as these cats? They’ve been killing it live and both are classic members of the thrash pantheon in their own rights. Paul even arguably played on Slayer’s arguably MOST classic record GOD HATES US ALL since the early days!

“Chasing Death” is perhaps the highlight track, coming off the powerhouse bridge and end sections of “When The Stillness Comes” and lifting the middle of the record to the next level. It’s sure to be considered a late career winner in the long run and is the hardest hitting track on this album.

Is Repentless the finest Slayer offering? No, but it is certainly chock full of evil. How long ago did Hell Awaits come out? Fuck!

The Terry Date production snarls and the everything is right up front in your face but balanced. I’ve heard people say the word “society” and other phrases repeat too much, but if you look back…shit, I used to play drinking games to past Slayer albums every time Araya said a word that ended in “Y”.

“Take Control” is charged up tom rolls and snare attack the way fans crave, with a political/war bent and plenty of circle pit “friendly” moments. “Implode” and “When The Stillness” comes were early mid paced teaser singles that set a dark tone, while “Vices” is certain to cause some whiplash. I think Kerry really rose to the occasion here all things considered. And you can’t help but feel Jeff’s lingering influence after all these years, which I take more as a sign of shared history. Sure, Araya has said it is “half Slayer” himself. Casual comments like that are a disservice though and they should be more careful, as Slayer fans can be rabidly quick to troll, sadly. I also don’t see why “A little violence is the ultimate drug…let’s get high” is getting flak elsewhere as such a bad lyric compared to a “Criminally Insane” line like “I have yet only just begunTo take your fuckin’ lives!”

This is not Shakespeare. It’s fuckin’ Slayer! Yes, still. They remain the best of the big 4.

Look, if we had only ever accepted early Sabbath their would be no Mob Rules. No Patton-era Faith No More if we’d stopped at We Care A Lot. Can we please try and keep the metal world alive for once? Five Finger Death Punch had better first week sales than Maiden even as their guitarist exalts Donald Trump. What the fuck? Can we have some haha “faith” in our more extreme bands who actually have a mainstream following? Like, how many orginal members are still in Metallica or Megadeth or Testament?!

Listening to the dark and spooky “When The Stillness Comes” intro or a recent tune like “Snuff” from World Painted Blood, I’m happy that Slayer still exist in a world of bullshit. Or D. Green fronted Sepultura for that matter, who also get way too much trolling despite having released some heavy ass amazing shit like A-Lex or Against. Do you think a band like Hate Eternal would ever have a chance of getting as big as Slayer in the current divisive and non album buying music climate?

As a journalist I get a lot of promos but I’m def going to go buy this and support real metal anyway. Not just because their PR lady is one of the nicest out there or because of brand name loyalty, but because it fucking rocks. You should purchase it as well. It’s not South Of Heaven but it sure as hell aint Maroon 5 either and it sounds like Slayer to me.