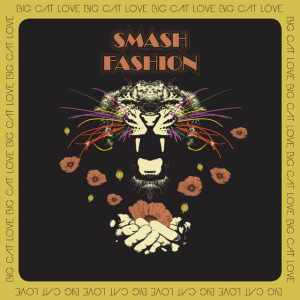 If you are like me and really love music, chances are you probably listen to a wide variety. While metal is my passion, I can easily go from Lana del Rey to Earl Greyhound to Goatsnake. One reason I loved Type O Negative so much is they could be super doomy and Sabbathy one minute to comedy goth rock the next to a military marching band from hell or a Beatles loving psyhedelic band. Anyway, I’ve also got a big love of early Glam rock and also Sunset Strip music…anything from T-Rex to Slade to…(I’ll say it) Poison. So I was quite stoked to get an actually great new glam release from a band called Smash Fashion the other day.

Big Cat Love is a very fun and solid collection of pop-laced rock n roll, the kind of sing-a-long album they don’t make enough these days. It isn’t saccharine in production, the tunes shine and the playing is stellar. “Marionette” rocks like classic Kiss in a good way, the band have the look and the songs straddle a great line between early New Romantics and throwback 60’s and 70’s stuff with a bit of the better side of the 80’s hair scene (but really tastefully tempered). “You Love to Suffer” is an awesome, trippy kind of proto-ballad about a miserable gothy girl who loves moping and it is very memorable. “You’re so obsessed with death and gloom, Riding around on your witches broom, A little bit of sunshine would do you good,” coos vocalist and guitarist Roger Deering.

The Los Angeles band are worth your attention, full of a kind of sunny swagger that hits the nail on the head. Not as seedy as The Prophets of Addiction, another awesome act I recently discovered, these guys instead opt for a more pursed lips and cocky strut on songs like title track “Big Cat Love” and the funny “Strike My Fancy (knickers down). I definitely hear some “Ballroom Blitz” in a lot of this stuff, though the band keeps things about mid tempo for most of the record. It also helps that they can really play their instruments, have great catchy back up vocals and aren’t a bunch of sticks in the mud. “Just a kiss at the starting line” is even a rock ballad about getting some love from your baby when you are feeling like shit about your lousy job, a rather down to earth sentiment from a band that could certainly just play the part of pretending to look down on fans from a hypothetical arena in a bygone era. But yeah, these guys rule and deserve props.

This is a great album for a party summer and I recommend you check it out at www.smashfashionmusic.com