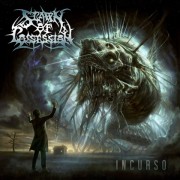 “Do you hear that Mr. Anderson? That is the sound of inevitability”. These words from Agent Smith (of the Matrix movies is case you weren’t in the know) are quite poignant when it comes to the topic of Spawn of Possession’s latest mind thrashing, Incurso. We knew it was inevitable, that it was only a matter of time before S.O.P. would emerge, once again, to throw their hat into the ring of the best technical death metal bands around. Six years after their sophomore release, Noctambulant, Spawn of Possession have not only come back to join the ranks of the best in tech-death, but have quite possibly jumped to the front line to spear- head the entire tech-death attack.

Get the complete low down here.

Pushing the boundaries of technical death metal can often lead to a finished product that has no real cohesiveness. It’s not enough to be a master of your instrument, to make a successful tech-death album you also must possess (no pun intended) a degree of songwriting, i.e. something memorable. Spawn of Possession definitely had the songwriting down with their debut, Cabinet, but seemed to lose it (for me at least) in the fret shredding madness of Noctambulant. Incurso sees the band regaining this songwriting skill, meshing the Cabinet and Noctambulant periods magnificently, while building upon the frantically blissful cacophony that this (super)group is known for.

Guitarist Jonas Bryssling, and vocalist Dennis Rondum are not only the last original members of Spawn of Possession, but are also the only returning members from Noctambulant, but Fans shouldn’t worry for the line-up of Incurso is most impressive. Christian Muenzner (ex-Necrophagist, Obscura) has been brought in to do leads, while Erlend Caspersen (Blood Red Throne, Deeds of Flesh) has been tapped to handle bass duties. Anyone familiar with their other bands, know that these guys can not only match the previous ante, but can (and will) raise it. Henrik Schonstrom has been brought into take over in the drum department this time around, as Rondum only contributed to the vocal and lyrical aspect on Incurso.

The instrumental track, “Abodement”, already sees Spawn of Possession utilizing a well-conceived thought process in the fact that not only is it a fantastic little musical piece, but it also sets up and introduces the epic chaos, that is about to ensue, perfectly. The driving drums, crunching riffs, fluid bass, and swirling guitar work, all with the elegant, yet sinister piano underneath it, point to not only something special about to happen, but something revolutionarily mind blowing.

“Where Angels Go Demons Follow” comes ripping out of the gates immediately with the devastating drums of Schonstrom getting right to the point, blasting and tearing their way with a crazed precision that is phenomenal. His drumming on Incurso is massive, it not only pummels the listener, but propels the music, ebbing and flowing just right, helping to not only enhance, but to build a chaotic structure in its own right. The playing of Bryssling is top-notch, his riffing twists and turns with such a tightness and clarity that is simply awe-inspiring. Riff to riff transitions can be very hard to achieve in tech-death, the overall fast pace and multiple change ups can lead to a very sloppy rendering of what might be initially intended. Bryssling though handles these transitions remarkably.

The addition of Muenzer to the S.O.P. ranks is an extremely wise choice. The man is simply a beast when it comes to the lead work found in this track and the album as a whole. Muezner doesn’t just play wicked guitar, he creates aural sonic landscapes, bursting with a flashy, colorful arrogance that makes his playing so damn awesome and appealing. The bass of Caspersen is also something to be noted, in fact the man should be endorsed by Kellogg’s Rice Krispies, for I’ll be damned if his bass performance doesn’t snap, crackle, and pop in the most pleasing ways.

I wasn’t sure what to expect out of Rondum’s vocals this time around, I’ve liked his performances on the previous albums, but I had some reservations going into Incurso. A few years ago it had been announced that Matthew Chalk (ex-Psycroptic) would be taking over vocal duties, and I must say that I was excited. Chalk’s performances, on the early Psycroptic albums, were truly remarkable and I could only imagine what he would have contributed to Spawn of Possession. Sadly, Chalk didn’t stick around long enough for us to find out. Fortunately for us, Rondum puts in his best vocal performance yet. His growls are downright menacing, perfectly mixing with the musical onslaught.

Picking an album highlight from Incurso would simply be laughable. There really is no way to do so, as every bit of this album is as intriguing as the next. Each song has so much going on, so much detail to it, so much complexity to the structure, all the while spiraling on the edge of losing it, yet never actually crossing that line. Whether it’s the tornado of notes swirling around in a cranium crushing blanket of “Bodiless Sleeper”, or the slower, almost doom like passage that begins at the 8:20 mark of “The Evangelist”, or the Gorguts influence that takes place when the drums, guitar, and bass line up so opposingly perfect at the 2:55 mark of “Servitude of Souls”, you will be astonished. “Deus Avertat” mixes such intensity with some fantastic soloing that I thought my stereo speakers were going to melt, while “Spiritual Deception” shines through and through. The build-in and bass-work through-out “Spiritual Deception” is nothing short of stellar, bringing to mind a Chuck Schuldiner/Steve DiGiorgio tandem.

“No Light Spared” is another monster of superb riffing, peppered with intricate finger-work and many change-ups. It’s solo and bass interplay also recalls the aforementioned Schuldiner/DiGiorgio influence, becoming absolutely majestical at the 3:40 mark. Ex- S.O.P. guitarist, Jonas Karlsson, makes a guest appearance on “No Light Spared”, turning in a lethal solo, merging nicely with Muenzer’s style. Incurso closes out with “Apparition”, which features some fantastic orchestral arrangements. Much like the albums opener, “Abodement”, “Apparition” grabs the listener with is terrific mixture of rolling, pummeling drums, ringing guitars, and bass and piano interplay. The climatic highs and lows of the orchestral elements really help to make the groove found at the 4:00 mark to be much more powerful. The orchestration also brings to mind a Fleshgod Apocalypse vibe, but it works so much better, because they don’t rely on it for every song.

Obviously Incurso isn’t an album for the old-school death metal elitists, or the type of album one listens to for a quick metal fix, nor is it intended to be. Incurso is an album that may take some dedication and exploration. I can see how some would claim a repetitiveness to the songs, giving it the “if you heard one song, you heard them all” treatment. This album is dense, and every song does have “everything but the kitchen-sink in them”. It’s an ambitious affair to say the least, there’s tapping, growling, blasting, lurching, dissonance, shredding melody, and even the sweeps, beeps, and the creeps. Yet those that put in the time will be pleased with their handsome reward.

Also worth mentioning, is the lyrical work of Rondum. His lyrics are not your standard verse/chorus affair, rather they are presented in a more formal storytelling style that actually works marvelously. His placing of words and the phrasing he uses melds with the songs in such unity that it sometimes blows your mind. Not to mention that his lyrical themes are wonderfully bizarre.

Spawn of Possession once again went with Magnus Sedenberg to help produce, and once again this has proved to be a wise choice. While the songwriting of Bryssling is indeed dense, the production is not. Every instrument is clear and audible, yet no heft or magnitude of heaviness is lost. The songs all bristle with such an energy, such a chaotic beauty that no words really does it justice. Throw in an awesome glossy cover, courtesy of the very popular Pars Olofsson, and you have yourself one of the best technical death metal albums of the 21st century.

My only real criticism of this album is in its length. Any metal album can make one start to feel a bit winded once you get close to the one hour mark, and when you’re talking about a style as intense and involved as Spawn of Possession’s, it can become suffocating. At 52 minutes, Incurso may just be a little too much for some to swallow at one setting. If your metal appetite and palate are huge, then by all means do yourself a favor and dive headfirst into it, you won’t be sorry.