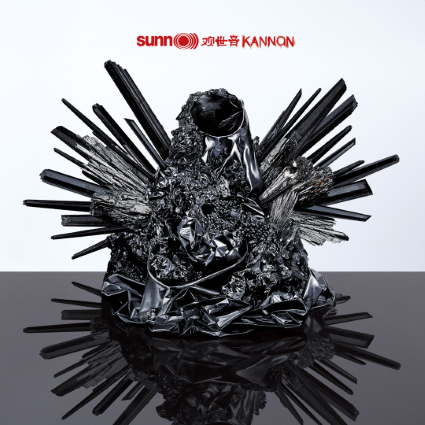 Sunn O))) are a band where you show up for the experience. Be it live immersion ritual or the banquet of movements that tend to make up their diverse (to the keen ear) yet droning records, the band are purveyors of the finest sonic wines when it comes to the intermixture of textural arrangements. Listening to the band at times can be like travelling through some symphonic cave of feedback, strings, half heard voices and grasped for revelations. It’s very much a fight between the headiness of the music and being removed by the overall overwhelmng body impact of the tones.

New record Kannon is not as complicated in construction as the massive Monoliths & Dimensions, an admittedly towering achievement of a record. That said, Kannon‘s “goddess of mercy/perceiving the sounds or cries of the world” philosophical and spiritual facets are a refining of many elements that have been present in the group’s aesthetic for awhile yet, as the band admits in the press release, more figurative than their usually more subjective records. “Kannon 2” howls like “Boris” by the Melvins was slowed to a 4th of it’s already famously ponderous speed and no drums were involved, instead letting some of the biggest rung out riffage in the band’s recent years swallow the whole world before semi-Gregorian sounding chanting cements the vibe. It could have been an instrumental but you feel caught up in the presence of the whole.

The wonder of this record is that you don’t always have time to question if they could’ve added or taken away at times because you are too distracted feeling it. “Kannon 3” is 11:26 of ear ringing that shows this drone approach can still compete with the Prurient fans and noise/ industrial types for impact.  With Kannon it comes on like a fake didgeridoo of wall of guitar distortion, ringing out with a solitary,slight twang and natural control you might expect from Duane Denison, yet doomy as fuck. No member or collaborator overshadows.

Another album that runs welcome and counter to the brainwashing meme culture and prison-like pop format chatter of the general public’s limited scope of conceptual ideas.