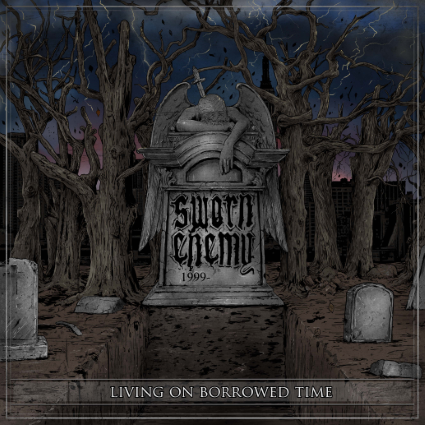 Sworn Enemy are for a certain type of hardcore and metal fan. If you didn’t like them before for some stupid reason, Living On Borrowed Time isn’t going to change things. And that’s good for the rest of us.

The new album from veteran Sal LoCoco’s street smart crew continues to meld thrash and late 90’s Biohazard-esque mosh core with a certain “maniacal” savvy, anger and conviction. Titles like “Do Or Die” and “Hard Way” plus spine crippling double bass and Overkill-type 80’s thrash solos are arm in arm here with pit friendly distorted havok. It is always refreshing to hear something this pissed, violent sounding and yet capable of making old riffs sound new again, not to sound too critical. The band are walking familiar ground, but the spirit and performances remind you what you love about this type of shit.

“Broken Hope” is pure ruckus with a groove laden, Scratch The Surface SOIA type bass-centric riff that switches about a minute in into a classic pickin’ up change type riff that Sworn Enemy own so well. Sal makes you feel the frenzy with barked vocals and the band are on point. While this record doesn’t have as good production as, say, the most recent Pro-Pain, Sworn Enemy more than deliver a solid album here. This is another empowered addition to their recorded output and will certainly translate well to the live set. Living On Borrowed Time is great if you are itching for a return to the old school feel and are sick of bullshit breakdowns in drop C that often substitute for songwriting these days.

Seriously, why is I Killed The Prom Queen or Memphis May Fire or I See Stars and fucking bullshit Falling In Reverse considered in any way “core” when a band like Sworn Enemy can write “No Mercy” in their sleep and blow all that shit out of the water? Ok, I’ll admit I like the bridge of “Thirty One & Sevens”, but mofos need to go back and listen to Stigmata, Sworn In, whatever. Sure, the new school is doing their new thing for these times but…really?!! If you need newer hardcore bands that are good, fucking rep Trap Them, Power Trip or San Antonio’s SnakeWay (I just got their new EP from Ryan at Think Fast! and it is fucking awesome). Real shit. Brick By Brick who Sworn Enemy have been gigging with. Trapped Under Ice. Do the scene right!

Hey, I love some new school style shit. I dig Parkway Drive and The Ghost Inside. Those bands are great at what they do. I even own a For Today record and think they are great live. But some kids don’t discriminate and just go for the shittiest of the new bands no matter how much people try to save their musical lives. Gaaahhhh!!!!!!

Sworn Enemy is the kind of crossover that stands the test of time and is “never out of season”. While the song titles couldn’t be more textbook hardcore sounding (“Rise Above”, guys?), Sworn Enemy are a band like Terror who just get you pumped regardless. They are just great at what they do and Daniel E Lamagna on the drums especially just nails the adrenaline needed in hardcore and thrash drumming. You will not make it through this album without at least envisioning a few flying fists if not participating in an actual mosh. From the banshee wailing intro guitar squeals of opener “Do Or Die” (which has some almost Megadeth sounding lead work) to the startling acoustic and clean tone Spanish sounding flavor of “One Eye Open” that morphs into classic Sworn Enemy face breaking, you gotta give these guys the nod of respect.