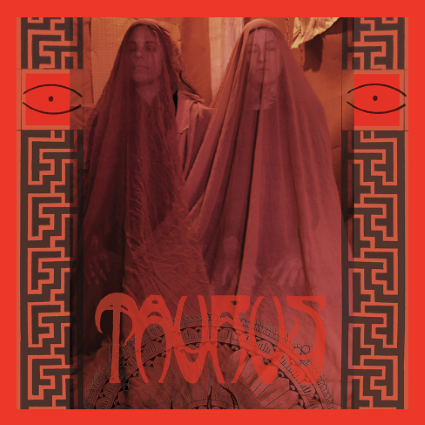 No/Thing by Taurus is the trippiest record I have heard this year still, and not in some shitty college jam band way. I told the band via email recently that it kind of reminds me of when I used to take acid and listen to Skinny Puppy’s Last Rites to scare the shit out of myself, but this is from a decidedly more witchy rock background than the famed industrial firebrands. Taurus have had No/Thing available independantly via bandcamp since April, but it really needed a proper review on this site still. Summer getting you down with too sunny days filled with frisbee tossing losers? Put this on and watch them scatter.This album is a stunner.

Featuring Stevie Floyd of Dark Castle and Ashley Spungin, formerly of Purple Rhinestone Eagle, the band are currently chilling out due to Stevie Floyd’s pregnancy (congrats!), but this record will tide you over for some time with meaty riffs, disturbing forays into howling caverns and a sense of aimless drifting into a void of lonely gas planets lost beyond some distant nebula.

Moaning vocals on “Lives Long For Own” perfectly compliment the hypnotic repreated guitar, while sparse yet metal drumming with a nice dry sound is semi-set back in the mix to ensure you catch the groove but are mostly absorbed by the lonely samples of desperation and the claustrophobic riff labyrinths. “People are desperately trying to free themselves from this fleshy prison”, repeats a voice ad nauseum until you really feel disturbed. “Increase Aloneness” is a ritualistic gloom with ethereal tones and beautiful vocal ambience that sets you up for a thrilling feeling of near religious catharsis. Fans of Attila Csihar’s obscurist vocal tendencies will appreciate the diverse textures of this release, though the afforementioned song is the most melodic and chanted of the batch, more along the lines of Sub Rosa meets Delerium before masterfully patient drumming loops beneath one of the more rewarding, semi-Nuerosis indebted guitar segments of the whole record churns you home to Babylon.

Closer “Receed” features guest vocals from Leviathan’s Wrest, perhaps proof to his detractors that he doesn’t hate all women, an inspired number that is more of a movement of sound collages and percussion paired with snarls and mournful spirits than a song. It has the imminent feel of a permanently missed departure time, impending doom descending. Recorded to two-inch tape at Cloud City Studios by legendary sound magus Billy Anderson, the record marks yet another in a seemingly endless series of victories for the engineer. If you are tired of bands so predictable the music is almost an afterthought, prepare for an entirely different experience. If anything, this will frighten you out of your socks. It’s really kind of like embracing a bad trip and hoping you come out the other side, hold fast tattooed on your white knuckles.

U can pick it up or stream it HERE.