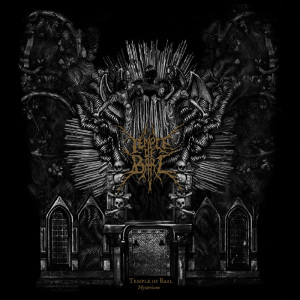 Mysterium is my favorite Temple Of Baal release since their more death-centric
Lightslaying Rituals (when I first discovered the band). And this might be their actual best.

This new release from the French deathened BM horde is full of snarled and commanding vocals,
cool arrangements and a great mix that balances things well. The drums are
somewhat subservient to the guitars as is often the style of some French BM
traditions, but the snare sound is cutting and great. The whirlpool of guitars
that often represents this band at their finest and most furious retain their
seat at the front of the mix, with the vocals audible but adding to the
overall texture as well.

I love Temple of Baal’s whiplash inducing solos, which climb and writhe like
snakes and are often over before you can blink. The screams as well,
particularly on opener “Lord of Knowledge and Death” are full of dedication to
the dark artistry of this music. I’ve listened to this record a lot in a short
amount of time and while it is fairly relentless, you don’t (or at least I
don’t) get fatigued by it like some of their past albums. The performances are all killer and delivered with bullseye intention.

In particular mad props to (I believe) current drummer Scvm (ex-Order of Apollyon) who is insane on this.

The 8 tracks offer just enough of a battle scarred landscape to
escape your dull day in full and create a severe, furrowed brow mental picture
of determination, despondency and a sort of warlike longing for more. Fans of
mid period Behemoth or recent Mayhem will really dig “Magna Gloria Tua”, which hits as hard as anything on Evangelion or Esoteric Warfare yet has a seriously creepy onslaught of an atmospheric laced bridge full of tremelo, chanted background vocals and excursions into serpentine, cavernous dissonance. Certainly one of the band’s greatest moments on record to date.

This is a rock solid record that finds the band striking a great balance between their newer atmospheric tendencies (which I love) and the ferocity they have always had no shortage of. The songwriting is also more memorable. It wasn’t bad in the past but whereas before they got by a bit more on classic aesthetics (ala Italy’s Malfeitor who were relentless and great but not the most original), attack and one of the cooler names in BM, now you will find yourself headbanging and yelling along to ToB’s “Holy Art Thou” like it is second nature.

“Your name is carved within our hearts as the deepest initiation scar…” I believe one of the cooler lines goes. I wonder who they are talking about, hahaha.