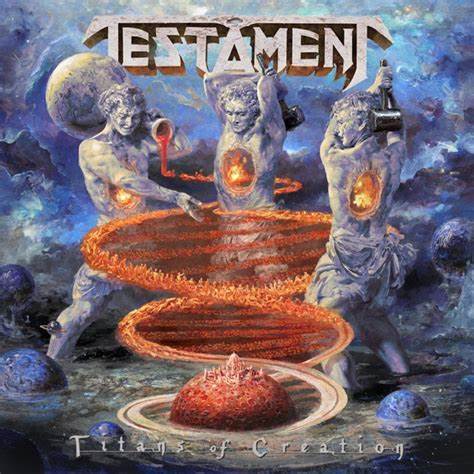 From the moment you hear “Children Of The Next Level” blast out of the speaker’s with supreme artillery confidence, it is evident that 2020 Testament is take no prisoners prepared to stand taller than any new buzz band in the genre. The huge grin of nostalgia and thrill of promised new glory that fans get each release is an awesome feeling that the band deliver on with ease. Undoubtedly in the top 4 now that Slayer are no longer standing (and arguably they were already deserving of being in the Big 4 over Megadeth for friggin’ years), Titans Of Creation is a near masterpiece of thrash. From Hoglan completely savaging the kit with jaw dropping performances locked tight with Steve DiGiorgio to many memorable lyrics and the bedrock structuring Testament is known for thanks in no small part to Eric Peterson, you can’t lose with this album.

“Curse Of Osiris” is a track that  opens with blistering hate that reminded me of superfast early The Legacy style Testament married to some unholy near Demonic worthy screams amidst the standard Chuck iconic barks and even some blasts. The tom rolls on this song! Chuck is in full command on this song, a total boss.  “Catacombs” has a theatrical ancient epic vibe you might expect on an instrumental current Sepultura track. This band is perfect for rallying the dejected right now.

“Dream Deceiver” stands out with more melodic, groove thrash riffage and a pushy mid-tempo chorus that alternates with technical faster measures for a thrilling and satisfying fix. “She won’t stop haunting me at night!” I firmly believe 100% that no other major thrash band has had as good a late stage 4 album run as Testament have pulled off since turning heads sharply when the excellent The Formation Of Damnation salvaged the group from an early grave. Just thinking back to the live shows from that time is such an exciting feeling, but I am just as excited about them this current album as ever. This really is the meaning of LEGACY (pun intended). Alex is one of the greatest guitarists in the history of the genre and this album certainly cements that yet again.

“The Healers” is timely considering the Coronavirus scare Chuck and Steve just went through and is one of the more stage ready powerful songs of the album telling us to get back in touch with nature in a time of 5G debates, pollution, mass death and traffic jams. Howling wolves and a respect for Mother Earth pepper the lyrical content with emotion and strength drawn from old wisdom. It’s one of the band’s most explosive and bad ass songs – along with the still anthemic “Native Blood” – in their storied discography. Also, who else in metal can bellow “My healing powers crystal blue” and have it sound tough as shit?

“Night of the Witch” is cool but was actually one of the weaker songs on the album. It is a single and still kicks the ass of half the bands out there, so that is pretty cool if a song still as good as NoTW is actually not the strongest material on a record. I can see why they released it as a single though, since the song has some of the eviler riffing and darker “Hell” vibes a lot of devil craving metal maniacs lust for. Skolnick and Peterson really own this song the most in the band, lending a Pantera level of technical flourish and rage to a few moments.

Again, this is peak 2020 metal that will strengthen any fan during this hard time. Hails to the legends!