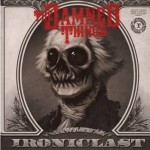 Side projects have always been an anomaly in music – musicians like to experiment with a different sound than what they are known for. Sometimes those projects succeed and are well received, sometimes they are not. File “Ironiclast” under the former. The debut album by The Damn Things, featuring Keith Buckley (Every Time I Die), Scott Ian and Rob Caggiano (Anthrax), and Andy Hurley and Joe Trohman (Fall Out Boy) offer up 10 solid hard rock songs that fit in at any party, bar, or whatever kind of debauchery you might be into.

There is nothing fancy about “Ironiclast”, its appeal is its simplicity. No weird instruments, no avant-garde sound, no bullshit. Just catchy rock songs that you can party to. The chemistry between these musicians is certainly there, and it shows in every song. “Handbook for the Recently Deceased” starts the album off with nice riffs and a great solo. “Graverobber” and “Ironiclast” features Trohman and Ian at their best, complimenting each other very well.

“Friday Night (Going Down In Flames)” brings the rock every night of the week. You can hear the blues influence on “Black Heart”. Those who are familiar with singer Keith Buckley’s screaming in the earlier songs of Every Time I Die may be surprised to hear that he can actually sing, as evidenced in “A Great Reckoning” and The Blues Havin’ Blues.” Buckley proves he is not just a screamer; in fact, not only does he sing well, his vocals fit well with the sound of The Damned Things. Guitarist Caggiano also produced the album, and succeeding in making “Ironiclast” sound big and dirty, while capturing the vibe of The Damned Things without over producing.

Who knows how far The Damned Things plan to take this project. (Hell, who knew guys from Anthrax would be collaborating with guys from Fall Out Boy?). If “Ironiclast” is any indication, they have a bright future ahead of them. Even if the members go back to their respective bands and The Damned Things are never to be heard from again, this is an album that they can be proud of.