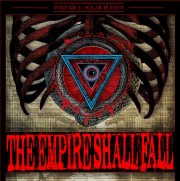 The Empire Shall Fall turned heads on “Awaken” with furious passion and highly punctuated heavy grooves (not to mention ex-Killswitch vocalist Jesse Leach’s return to a band of the “metalcore” genre). It is always exciting to see a band with huge potential grow, but with their new EP “Volume 1: Solar Plexus” The Empire Shall Fall have made a record so good that people will be too distracted to compare it to “Alive Or Just Breathing.” Honestly, I think this EP is worthy of a perfect 5 stars and is maybe the best thing Leach has ever done.

When I interviewed bassist Nicholas Sollecito awhile back he said,”I will say that this is a fun band to be in. We take chances others either are afraid to take, or just don’t think of.” That certainly holds true for this EP which will only be available on 180 gram vinyl and high quality digital download. Upon completion of all three EP’s, the band will press all three EP’s to one full-length CD.  Those who pre-order all three EP’s on vinyl will receive a free copy of the full-length CD upon release.

“Solar Plexus” is non stop excitement and will rekindle the spark for anyone who felt this “style” of metal was washed up. It’s not even fair to pigeonhole TESF because they draw inspiration from all over the place. Leach’s melodies have perhaps never been stronger and the riffs are staggering. Lyrically this is some of the most inspiring music I’ve heard since Boy Sets Fire’s still bulletproof “After The Eulogy.” Peep “The Genesis Of These Scars” and tell me it doesn’t get you really pumped. “As The City Sleeps” manages to be really moving and caustic, shredded screams merging with hope inspiring swirling textures and locked down rock solid crunch.

This material would all be staggering in a live situation. I mean, this release has done nothing short of blow my mind. “Narrow, The Path I Walk Pt.1” contains serious guitar heroics while much of the EP sounds like Bad Brains jamming with Unearth, At The Drive In,Meshuggah and…Jesse Leach. The refreshing “Dubrise” interlude and other twists keep you wanting to play this again and again. This has the social awareness and energy level that made One Day As A Lion’s debut EP so exciting, for example. Someone should put these guys on tour with Skindred, Stray From The Path, Elitist and God Forbid and just shut the game down once and for all.

Continuing with their DIY ethic, the band recorded the entire record in their Angle Side Side Studio.  The album was engineered by guitarist Marc de Lisle, and co-engineered by guitarist Jake Davenport and Nick Sollecito.  Marc de Lisle also produced the record.  Mixing was handled by Sean Small, who mixed Awaken.  Guitar re-amps were done by Greg Tomao, at the Tomato Farm Studio.  Mastering was handled by Dave Ostero, of Flatline Audio.  Artwork was handled by Matt Yezuita, who created all the TESF artwork up to this point.  “Volume I: Solar Plexus” will be released via the band’s own record label, Angle Side Side.

The single, “As the City Sleeps,” can be found here.

More On: Metalcore, Album Review, The Empire Shall Fall
share on: