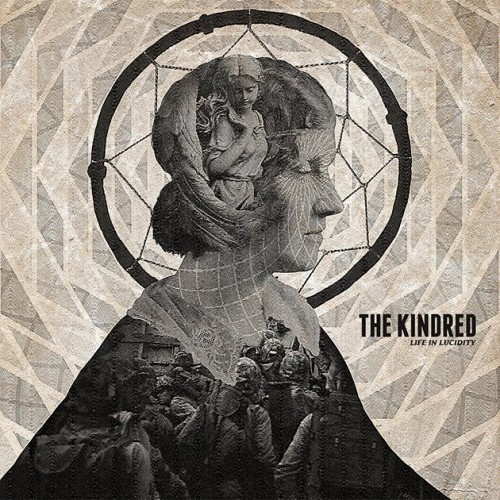 Canadian progressive metallers The Kindred (Formerly Today I Caught The Plague) have today dropped their debut album Life In Lucidity (via Sumerian Records).

The Kindred are currently on tour with Between The Buried and Me, Deafhaven and Intronaut.

You can check out the Metal Riot review of Life In Lucidity here.

This album starts off dark, with a creaking door taking us into its interior.

The piano in the opening track, ‘Wolvish’, reminds me of metallic and gothic My Chemical Romance or Panic! At the Disco. Other metal journalists might mean that as an insult, but I think it’s a beautiful effect, very cabaret. The chanty, chorusing vocals immediately following, layered under the instruments is a powerful touch.

The second track, ‘Heritage’, is driven by these enormous choruses that sound like an army marching toward you from far away. Your only safety is the driving guitar, the powerful drums and the belting of Dave Journeaux.

‘Everbound’ starts off, in contrast to ‘Heritage’ softer, less confrontational.

Dave Journeaux presents a strong NWOBHM yawp. The album is heavy not because the instruments are tuned all the way down, or it is the fastest, or there are growls or squeals or anything that a lot of modern bands do to affect heaviness (and usually do well, I might add). Instead, this album is heavy because the drummer is militant in persistence and rhythmic accuracy and the guitarists, Ben Davis and Steve Rennie, play into creating the larger effect.

It is simply a refreshing sound. I mean I love all types of metal (from groove to deathcore, alternative metal to some radio bands) but this kind of progressive, melodic sound without the cut-and-paste, air-brushed aspect, is hard to come by. The sound on this album is powerful. I love the way in which The Kindred have melded metallic-operatic vocal-stylings with such exact instrumentation.

In “Millenia” the band find a way to mix a bluesy feel with Journeaux’s signature NWOBHM yawp.

The downward chug at the end of ‘Seekers and Servants’ is awesome.

Ultimately Life In Lucidity is driven by it’s genre-bending ability. It is classic and powerful, and I recommend it for traditional metal and progressive metal fans.

More News On The Kindred: